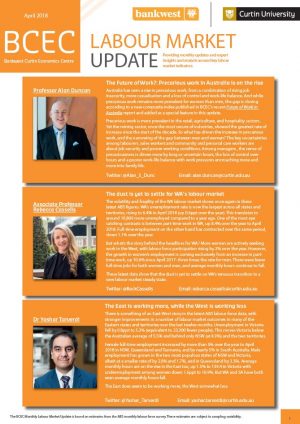 Welcome to the April 2018 edition of the BCEC Monthly Labour Market Update.

This latest edition includes a special feature on the rise of precarious work from our recent report Future of Work in Australia: Preparing for tomorrow’s world, launched in April.

We’ve also developed a new online Data Insights platform, where you can explore current and historical labour market data including changes to part-time and full-time employment, and track the unemployment rate across the nation from the past four decades.

Key findings from April 2018 data include:

The Future of Work?: Precarious work in Australia is on the rise

Australia has seen a rise in precarious work, from a combination of rising job insecurity, more casualisation and a loss of control and work-life balance. Precarious work is more prevalent in the retail, agriculture, and hospitality sectors. Yet the mining sector, once the most secure of industries, showed the greatest rate of increase since the start of the decade. The key uncertainties among labourers, sales workers and community and personal care workers are about job security and poorer working conditions. Among managers, the sense of precariousness is driven more by long or uncertain hours, the loss of control over hours and a poorer work-life balance with work pressures encroaching more and more into family life.

The dust is yet to settle for WA’s labour market

The volatility and fragility of the WA labour market shows once again in these latest ABS figures. WA’s unemployment rate is now the largest across all states and territories, rising to 6.4% in April 2018 (up 0.6ppt over the year). This translates to around 10,800 more unemployed compared to a year ago. One of the most eye catching contrasts is between part-time work in WA, up 8.4% over the year to April 2018. Full-time employment on the other hand has contracted over the same period, down 1.1% over the year. More women are actively seeking work in the West, with labour force participation rising by 2% over the year. However, the growth in women’s employment is coming exclusively from an increase in part-time work, up 10.6% since April 2017 – three times the rate for men.

There is something of an East-West story in the latest ABS labour force data, with stronger improvements in a number of labour market outcomes in many of the Eastern states and territories over the last twelve months. Unemployment in Victoria fell by 0.8ppt to 5.3% (equivalent to 23,300 fewer people). This moves Victoria below the Australian average of 5.5% and behind only NSW (at 4.9%) and the two territories. Average monthly hours are on the rise in the East too, up 1.5% to 139.4 in Victoria with underemployment among women down 1.5ppt to 10.9%. But WA and SA have both seen average monthly hours fall. The East does seem to be working more, the West somewhat less.