new insights from the last decade 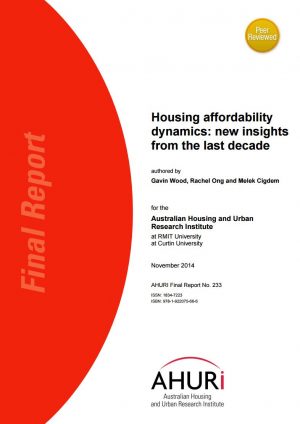 This report, funded by the Australian Housing and Urban Research Institute (AHURI), explores the duration of housing affordability stress (HAS) in Australia. It tracks the housing affordability trajectories of Australians over the period 2001–11. The dataset employed in this project is the nationally representative Household, Income and Labour Dynamics in Australia (HILDA) Survey. This project addresses three key research questions:

1. Were escapes from HAS permanent or temporary over the period 2001–11? To what extent did experiences of protracted and temporary spells in HAS vary by household characteristics?

2. To what degree are transitions in and out of HAS caused by changes in housing cost versus changes in income? Do Commonwealth Rent Assistance (CRA) arrangements serve as an effective buffer against sharp rises in rents or income shocks?

3. How often do households churn in and out of HAS? Why do some escape yet fall back into HAS at a later stage of their housing careers?

The present project will offer important innovations and new insights. The longer timeframe of the HILDA Survey offers excellent opportunities to more rigorously distinguish between the characteristics of persons permanently or temporarily trapped in HAS, as well as take into account the disruption to Australian housing markets that followed the Global Financial Crisis (GFC). This project will also inform policy recommendations by firstly providing vital indicators as to whether housing affordability issues in contemporary times would be more effectively dealt with via housing or labour market instruments, or a combination of both, and secondly proposing CRA reforms that strengthen their effectiveness as a protective buffer against HAS.