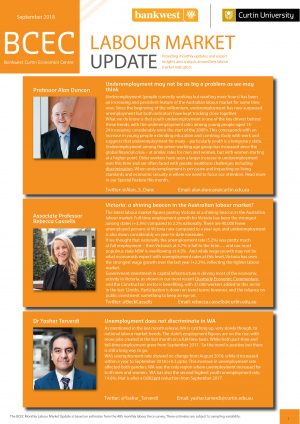 Welcome to the September 2018 edition of the BCEC Monthly Labour Market Update.

This latest edition includes a special feature on underemployment in Australia.

Key findings from September 2018 data include:

Underemployment may not be as big a problem as we think

Underemployment (the share of the workforce that want to work more hours) has been a growing feature of the Australian labour market for some time now. Underemployment remained below unemployment trends over the last century, but the two series crossed at the start of the millennium and underemployment has continued to track above unemployment since then. But what’s behind the rise of underemployment? And does this give cause for concern?

Victoria: a shining beacon in the Australian labour market?

The latest labour market figures portray Victoria as a shining beacon in the Australian labour market. Full-time employment growth for Victoria has been the strongest among states (up 3.3%) compared to a rise of 2.2% nationally. There are 40,000 fewer unemployed persons in Victoria now compared to a year ago, and underemployment is also down considerably on year-to-date measures.

Unemployment does not discriminate in WA

As mentioned in the last monthly release, WA is catching up, albeit very slowly, to national labour market trends. The state’s employment figures are on the rise, with more jobs created in the last month on a full-time basis. Part-time and full-time employment both grew from September 2017, so the trend is positive – but there is still a long way to go.