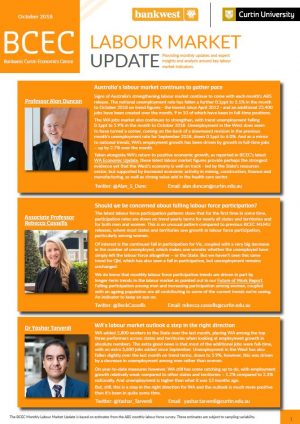 Welcome to the October 2018 edition of the BCEC Monthly Labour Market Update.

Key findings from October 2018 data include:

Signs of Australia’s strengthening labour market continue to come with each month’s ABS release. The national unemployment rate has fallen a further 0.1ppt to 5.1% in the month to October 2018 on trend figures – the lowest since April 2012 – and an additional 25,400 jobs have been created over the month, 9 in 10 of which have been in full-time positions.

Should we be concerned about falling labour force participation?

WA’s labour market outlook a step in the right direction

WA added 2,800 workers to the State over the last month, placing WA among the top three performers across states and territories when looking at employment growth in absolute numbers. The extra good news is that most of the additional jobs were full-time, with an extra 5,600 jobs added since September. Unemployment in the West has also fallen slightly over the last month on trend terms, down to 5.9%, however, this was driven by a decrease in unemployment among men rather than women.