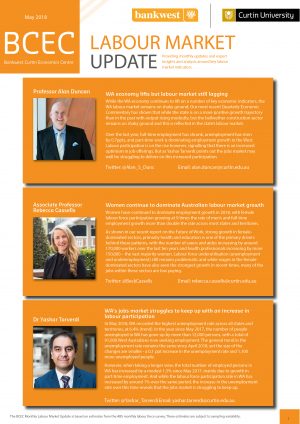 Welcome to the May 2018 edition of the BCEC Monthly Labour Market Update.

Key findings from May 2018 data include:

While the WA economy continues to lift on a number of key economic indicators, the WA labour market remains on shaky ground. Our most recent Quarterly Economic Commentary has shown that while the state is on a more positive growth trajectory than in the past with output rising modestly, but the bellwether construction sector remains on shaky ground and this is reflected in the state’s labour market. Over the last year, full-time employment has shrunk, unemployment has risen by 0.7ppts, and part-time work is dominating employment growth in the West. Labour participation is on the rise however, signalling that there is an increased optimism in job offerings. But as Yashar Tarverdi points out the jobs market may well be struggling to deliver on this increased participation.

Women have continued to dominate employment growth in 2018, with female labour force participation growing at 9 times the rate of men’s and full-time employment growth more than double the rate across most states and territories. As shown in our recent report on the Future of Work, strong growth in female-dominated sectors, primarily health and education is one of the primary drivers behind these patterns, with the number of carers and aides increasing by around 170,000 workers over the last ten years and health professionals increasing by more 150,000 – the vast majority women. Labour force underutilisation (unemployment and underemployment) still remains problematic and while wages in the female-dominated sectors have also seen the strongest growth in recent times, many of the jobs within these sectors are low paying.