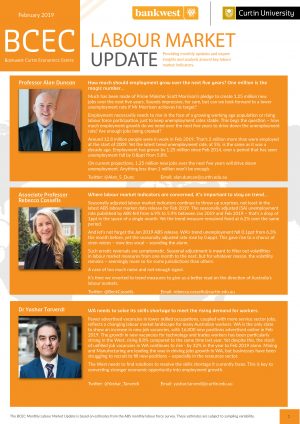 Welcome to the February 2019 edition of the BCEC Monthly Labour Market Update.

Key findings from February 2019 data include:

How much should employment grow over the next five years? One million is the magic number…

Much has been made of Prime Minister Scott Morrison’s pledge to create 1.25 million new jobs over the next five years. Sounds impressive, for sure, but can we look forward to a lower unemployment rate if Mr Morrison achieves his target?

Around 12.8 million people were in work in Feb 2019. That’s 2 million more than were employed at the start of 2009. Yet the latest trend unemployment rate, at 5%, is the same as it was a decade ago. On current projections, 1.25 million new jobs over the next five years will drive down unemployment. Anything less than 1 million won’t be enough.

Mining sector gaining pace….are we on the cusp of another boom?

The main industry story to emerge from latest national employment trends is one of continued upswing in the Mining sector. Mining has driven ahead strongly, with 21,700 more people employed in the sector in Feb 2019 compared to a year ago – a rise of almost 10%. And Mining was in the top three industry performers in four states over the last year, with WA adding almost 14,000 workers.

While the Mining sector won’t deliver for Australia what it did in the 2000s – it will deliver more than it has in recent years and has already fattened up government coffers. How well we’re able to capture and distribute the gains from this reinvigorated mining activity is a question worth pursuing.

WA needs to solve its skills shortage to meet the rising demand for workers.

Fewer advertised vacancies in lower skilled occupations, coupled with more service sector jobs, reflects a changing labour market landscape for many Australian workers. WA is the only state to show an increase in new job vacancies, with 16,000 new positions advertised online in Feb 2019. The growth in new vacancies for technology and trades workers has been particularly strong in the West, rising 8.8% compared to the same time last year.

Yet despite this, the stock of unfilled job vacancies in WA continues to rise – by 32% in the year to Feb 2019 alone. Mining and Manufacturing are leading the way in driving jobs growth in WA, but businesses have been struggling to recruit to fill new positions – especially in the resources sector.