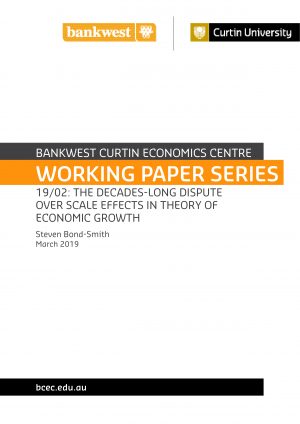 The so-called ‘new growth theory’ is characterized by the now Nobel Prize winning insight that ideas are a non-rival input to and output from endogenous investment in innovation. Non-rivalry implies increasing returns to scale, but this also unintentionally creates an empirically-disputed scale effect that a growing population implies an ever-increasing growth rate. Empirical evidence supports fully-endogenous growth without scale effects, but theoretical issues sustain the
decades-long dispute over exactly how to negate the scale effect. This article surveys theoretical approaches to resolving the scale effect and shows how four generations of endogenous growth theory are defined by the maturing of modeling techniques for constraining increasing returns. The synthesis suggests that the dispute over scale effects is really a narrative about how the powerful application of increasing returns has followed a standard theoretical development pattern. This implies that a fourth generation is now emerging that negates the scale effect while retaining fully-endogenous growth without relying on assumptions of linearity. Instead, the market response to excessive increasing returns to innovation constrains explosive growth by expanding the market, rather than by a linear assumption. This latest class of endogenous growth models may be the final chapter to resolving the long running dispute.