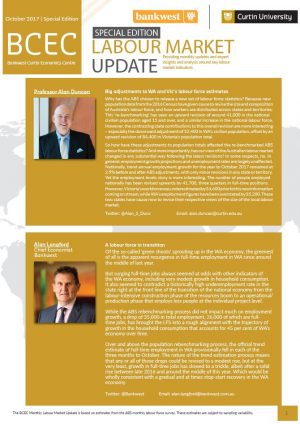 This special edition BCEC MLMU has been released to examine the impact of the major population re-benchmarking of the ABS Labour Force Survey. Every five years the ABS uses new information gathered from the Census to update its labour force estimates.

BCEC has put together a special edition of its MLMU to unpack what the new estimates mean across Australia’s states and territories.

We also welcome guest commentator Alan Langford, Chief Economist and his insights around what the major re-benchmarking means for Western Australia.

Key findings from this special edition include:

Why has the ABS chosen to release a new set of labour force statistics? Because new population data from the 2016 Census have given cause to revise the size and composition of Australia’s labour force, and how workers are distributed across states and territories. This ‘re-benchmarking’ has seen an upward revision of around 41,000 in the national civilian population aged 15 and over, and a similar increase in the national labour force. However, the contrasting state contributions to this overall revision are more interesting – especially the downward adjustment of 52,400 in WA’s civilian population, offset by an upward revision of 84,400 in Victoria’s population total.

A labour force in transition

Of the so-called ‘green shoots’ sprouting up in the WA economy, the greenest of all is the apparent resurgence in full-time employment in WA since around the middle of last year. While the ABS rebenchmarking process did not impact much on employment growth, a drop of 35,000 in total employment, 26,000 of which are full-time jobs, has brought the LFS into a rough alignment with the trajectory of growth in the household consumption that accounts for 45 per cent of WA’s economy over time.

More of WA’s tradies and miners heading back over East

One of the key signals to come from the revised ABS labour force figures is the apparent movement of skilled labour between states. Re-benchmarked ABS data for October 2017 indicate some 23,300 fewer male workers in WA, including 20,200 fewer men working full-time. This suggests that there has been a greater outflow of workers from WA to other jurisdictions than previously envisaged, particularly to Victoria where we have seen an upward revision in the number of full-time male workers of around 23,000. Similar patterns are apparent among the female workforce, although not to quite the same scale.

Net migration flows between Australia’s states and territories tell much of the story behind the recent adjustments to ABS labour force statistics. Since 2014, WA has seen more interstate departures than arrivals, leading to negative net interstate migration flows. The scale of net migration outflows from WA have grown to a net loss of nearly 11,800 people during the 2016-17 financial year. Interestingly, WA’s net migration patterns for much of this period correlate strongly with the prevailing iron ore price – a good proxy for the changing fortunes of the resources sector in the West.