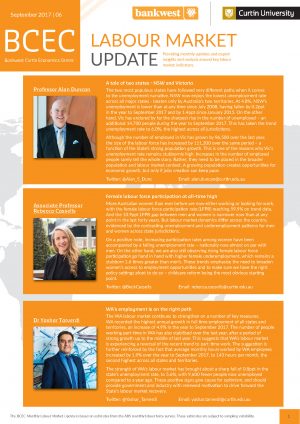 Welcome to the sixth edition of the BCEC Monthly Labour Market Update.

Key findings from September 2017 data include:

A tale of two states – NSW and Victoria

The two most populous states have followed very different paths when it comes to the unemployment narrative. NSW now enjoys the lowest unemployment rate across all major states – beaten only by Australia’s two territories. On the other hand, Vic has endured by far the sharpest rise in the number of unemployed – an additional 14,700 people during the year to September 2017. This has taken the trend unemployment rate to 6.0%, the highest across all jurisdictions.

More Australian women than ever before are now either working or looking for work, with the female labour force participation rate (LFPR) reaching 59.9% on trend data. And the 10.9ppt LFPR gap between men and women is narrower now than at any point in the last forty years. Increasing participation rates among women have been accompanied by a falling unemployment rate – nationally now almost on par with men.

WA’s employment is on the right path

The WA labour market continues to strengthen on a number of key measures. WA recorded the highest annual growth in full time employment of all states and territories, an increase of 4.9% in the year to September 2017. The number of people working part-time in WA has also stabilised over the last year, after a period of strong growth up to the middle of last year.