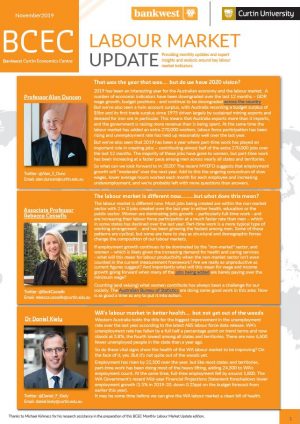 Welcome to the November 2019 edition of the BCEC Monthly Labour Market Update (MLMU). This latest MLMU release provides expert insights and analysis around the latest ABS Labour Force data release for November 2019, focusing on employment patterns across state and territories.

We hope you enjoy our latest economic insights and welcome any questions, suggestions or feedback.

Key findings for November 2019 include:

2019 has been an interesting year for the Australian economy and the labour market.  A number of economic indicators have been downgraded over the last 12 months, nationally and across the country. But we’ve also seen a twin account surplus, with Australia recording a budget surplus of $5bn and its first trade surplus since 1975 earlier this year driven largely by sustained mining exports and demand for iron ore in particular. This means that Australia exports more than it imports, and the government is raising more revenue than is being spent. At the same time the labour market has added an extra 270,000 workers, labour force participation has been rising and unemployment rate has held up reasonably well over the last year.

But we’ve also seen that 2019 has been a year where part-time work has played an important role in creating jobs – contributing almost half of the extra 270,000 jobs over the last 12 months. The majority of these jobs have gone to women, but part-time work has been increasing at a faster pace among men across nearly all states and territories.

So what can we look forward to in 2020? The recent MYEFO suggests that employment growth will “moderate” over the next year. Add to this the ongoing conundrum of slow wages, lower average hours worked each month for each employee and increasing underemployment, and we’re probably left with more questions than answers.

The labour market is different now………but what does this mean?

The labour market is different now. Most jobs being created are within the non-market sector with 2 in 3 jobs created over the last year in either health, education or the public sector. Women are dominating jobs growth – particularly full-time work – and are increasing their labour force participation at a much faster rate than men – which in some states has declined over the last year. Part-time work is a more typical type of working arrangement – and has been growing the fastest among men. Some of these patterns are cyclical, but some are here to stay as structural and demographic forces change the composition of our labour markets.

If employment growth continues to be dominated by the “non-market” sector, and women – which is likely given the increasing demand for health and caring services – what will this mean for labour productivity when the non-market sector isn’t even counted in the current measurement framework? Are we really as unproductive as current figures suggest? And importantly what will this mean for wage and income growth going forward when many of the jobs being added are barely paying over the minimum wage?

Counting (and valuing) what women contribute has always been a challenge for our society. The Australian Bureau of Statistics are doing some good work in this area. Now is as good a time as any to put it into action.

WA’s labour market looks to be in better health…. but is it out of the woods?

Western Australia holds the title for the biggest improvement in the unemployment rate over the last year according to the latest ABS labour force data release. WA’s unemployment rate has fallen by a full half a percentage point on trend terms and now stands at 5.8%, the fourth lowest among all states and territories. There are now 6,600 fewer unemployed people in the state than a year ago.

So do these vital signs show the health of the WA labour market to be improving? On the face of it, yes. But it’s not quite out of the woods yet.

Employment has risen by 22,500 over the year, but like most states and territories, part-time work has been doing most of the heavy lifting, adding 24,300 to WA’s employment count. At the same time, full-time employment fell by around 1,800. The WA Government’s recent Mid-year Financial Projections Statement foreshadows lower employment growth (1.5% in 2019-20, down 0.25ppt on the budget forecast from earlier this year).

It may be some time before we can give the WA labour market a clean bill of health.