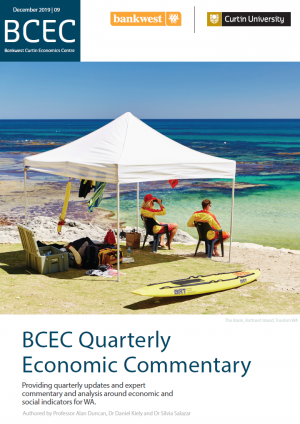 Mixed economic tidings for WA this Christmas
With the recently announced Mid-Year Financial Projections Statement, WA Treasurer Ben Wyatt has delivered mixed news as we head into the new calendar year. The downward revisions to economic growth forecasts were to be expected, with Gross State Product growth over the year to June 2019 coming in at 1.0 per cent, a full percentage point lower than Budget 2019-20 assumptions as a result of “global and national economic headwinds”. However, the revised GSP growth projection for 2019-20 is still strong, and predicated on improving business investment, household consumption and wage growth. With this in mind, the eye is particularly drawn to wage growth forecasts in the 2019-20 Mid-Year Review of 2.0 per cent for the 2019-20 financial year (down from 2.25 per cent) with further downward revisions of 0.5ppt in each of the forward estimate years to 2022-23. This seems a reasonable adjustment to make, given the slow pace of labour market recovery. However, WPI growth of 0.7 per cent for the September 2019 quarter provide some grounds for optimism that wages growth could indeed cross the 2 per cent threshold by the end of the 2019-20 financial year. General government revenues have been revised upwards by $1.22bn for 2019-20, with the lion’s share of this boost coming from increased royalty income driven by higher iron ore prices. Coupled with a focus on expenses through control of public sector pay, this has led to a forecast budget surplus of $2.6bn for 2019-20, $1bn more than was forecast in the 2019 budget. With mining now accounting for 40 per cent of the WA economy, the State’s exposure to international trade wars is extreme heading into 2020. As we hit an election year, sensible financial control should continue. In the meantime, policies aimed at economic diversification will continue to be a key 2020 mantra.

As we look forward to 2020, has business investment in WA finally bottomed out?
Even those with 2020 vision can’t see with any certainty what the future holds. For some time now the question of whether business investment has ‘bottomed out’ has been asked across WA, with the question ‘are we there yet?’ being posed in this commentary some two years ago. Positive growth across the last two quarters suggest that we are there. However, looking at the road travelled is of interest. Non-dwelling construction expenditure – by far the largest component of business investment in WA for over fifteen years, has declined now for seventeen (17) consecutive quarters (averaging -6.2% over that period), with a -2.2 per cent growth in the most recent September 2019 quarter. Decreases were always inevitable in this component as the WA economy shifted from the construction to production phase of the mining boom. While the rate of decline in this component is decelerating, there is not yet an end in sight for continued declines. The road to positive growth in business investment is driven by machinery and equipment, which comprises a 38 per cent share of total business investment in WA. Growth in this component has averaged 4.5 per cent over the last three quarters, and stood at 6.0 per cent in the quarter to September 2019. While overall business investment growth is to be welcomed, the road to this position suggests that we may not be ‘there’ just yet.

A Christmas bonus: Wage growth on the up across the nation
Nationally, the Wage Price Index (WPI) is showing some positive signs, increasing by 2.3 per cent over the previous twelve months. For WA this figure is a much lower (1.6%), with increases in hourly rates of pay in WA remaining lower than those reported nationally for twenty two (22) quarters now. Nevertheless, we should also keep in mind that WA continues to have the highest average weekly earnings of all states ($1,780) despite its low growth. However, for WA the WPI growth in the quarter to September 2019 stood at 0.7 per cent, the highest seen in WA since December 2014 (also 0.7%). Nationally, the quarter-on-quarter growth in wages to September 2019 stood slightly higher at 0.8 per cent. While it is not yet at a stage to hear ‘shouts of joy’ across the nation this Christmas, a continuation of this upward trend into 2020 will be of critical importance towards a stronger economy. In fact, the Mid Year Financial Statement estimates Wage Price Index growth of 2.0 per cent for 2019-20, with an additional quarter of a percentage point each year to 2022-23 (that is, 2.75% WPI growth in 2022-23). Together with a stronger labour market in 2020, such improvements would certainly lead to a much needed boost to consumer spending, with the retail sector barely starting to get its head above water in WA (+0.4% in the month to October).