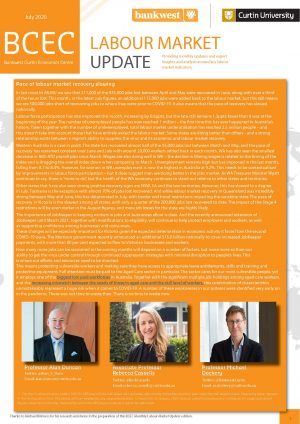 In last month’s MLMU we saw that 211,000 of the 835,000 jobs lost between April and May were recovered in June, along with over a third of the hours lost. This month, in the latest July figures, an additional 115,000 jobs were added back to the labour market, but this still means we are 500,000 jobs short of recovering jobs to where they were prior to COVID-19. It also means that the pace of recovery has slowed nationally.

Labour force participation has also improved this month, increasing by 0.6ppts, but the rate still remains 1.3ppts lower than it was at the beginning of the year.

The number of unemployed people has now reached 1 million – the first time this has ever happened in Australia’s history. Taken together with the number of underemployed, total labour market underutilisation has reached 2.5 million people – and this doesn’t take into account those that have entirely exited the labour market.

Some states are doing better than others – and a strong relationship exists between a region’s ability to suppress the virus and its economic and labour market recovery.

Western Australia is a case in point. The state has recovered almost half of the 95,000 jobs lost between March and May, and the pace of recovery has remained constant over June and July with around 20,000 workers added back in each month. WA has also seen the smallest decrease in ABS-ATO payroll jobs since March.

Wages are also doing well in WA – the decline in Mining wages is related to the timing of the index and is dragging the overall index down when comparing to March[1]. Unemployment remains high but has improved in the last month, falling from 8.7 to 8.4%. However, for women in WA unemployment is now the highest in Australia at 9.2%. This needs to be contextualised by improvements in labour force participation – but it does suggest men are doing better in the jobs market. As WA Treasurer Minister Wyatt continues to say, there is “more to do”, but the health of the WA economy continues to stand out relative to other states and territories.

Other states that have also seen strong positive recovery signs are NSW, SA and the two territories. However, this has slowed to a degree in July. Tasmania is the exception with almost 70% of jobs lost recovered. And while labour market recovery in Queensland was incredibly strong between May and June, this has deteriorated in July, with border and travel restrictions impacting the sunshine state.

The pace of recovery in Victoria is the slowest among all states, with only a quarter of the 200,000 jobs lost recovered to date. The impact of the Stage 4 restrictions will be even starker in the August figures, and more job losses for the state are highly likely.

The importance of JobKeeper in keeping workers in jobs and businesses afloat is clear. And the recently announced extension of JobKeeper until March 2021, together with modifications to eligibility, will continue to help protect employers and workers, as well as supporting confidence among businesses and consumers.

These changes will be especially important for Victoria given the expected deterioration in economic activity it faces from the second COVID-19 wave. The Morrison government recently announced an additional $15.6 billion nationally to cover increased JobKeeper payments, with more than 80 per cent expected to flow to Victorian businesses and workers.

How many more jobs can be recovered in the coming months will depend on a number of factors, but none more so than our ability to get the virus under control through continued suppression strategies with minimal disruption to people’s lives. This is where our efforts and resources need to be directed.

This means protecting vulnerable workers and making sure they have access to appropriate leave entitlements, skills and training and protective equipment. Full attention must be paid to the Aged Care sector in particular. The sector cares for our most vulnerable people, yet it employs one of the biggest low paid workforces in Australia. Together with the significant multiple job holdings among aged care workers, and the increasing mismatch between the needs of those in aged care and the skill level of workers, this combination of characteristics unmistakeably represent a huge risk when it comes to COVID-19.

A number of these weaknesses in our systems were identified very early on in the pandemic. There was not time to waste then. There is no time to waste now.

[1] The March reference point (index=100) for ABS payroll jobs and wages also coincides with mining companies financial year reporting and wage bonuses. Measuring wage changes in the mining sector from this period will over emphasise any wage deterioration. Comparisons to January 2020 show an overall improvement in mining sector wages and recent figures show this continuing. Seasonality within the ABS payroll outputs is yet to be addressed.