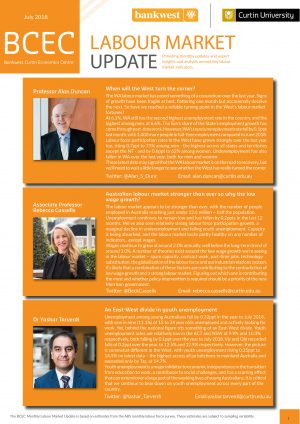 Welcome to the July 2018 edition of the BCEC Monthly Labour Market Update.

Key findings from July 2018 data include:

When will the West turn the corner?

At 6.1%, WA still has the second highest unemployment rate in the country, and the highest among men, at 6.6%. However, WA’s trend unemployment rate fell by 0.1ppt last month, with 3,400 more people in full-time employment compared to June 2018. Labour force participation rates in the West have grown strongly over the last year too, rising 0.7ppt to 75% among men – the highest across all states and territories except the NT – and by 0.6ppt to 62% among women. Underemployment has also fallen in WA over the last year, both for men and women. These latest data may signal that the WA labour market is on the road to recovery, but we’ll need to wait a little longer to see whether the West has really turned the corner.

Australian labour market stronger than ever so why the low wage growth?

Wages continue to grow at around 2.0% annually, well below the long-term trend of around 3.0%. A number of theories exist around the low wage growth we’re seeing in the labour market – spare capacity, contract work, part-time jobs, technology substitution, the globalisation of the labour force and our industrial relations system. It’s likely that a combination of these factors are contributing to the contradiction of low wage growth and a strong labour market. Figuring out which one is contributing the most and whether policy intervention is required should be a priority of the new Morrison government.

An East-West divide in youth unemployment

Unemployment among young Australians fell by 0.32ppt in the year to July 2018, with one in nine (11.1%) of 15 to 24 year olds unemployed and actively looking for work. Yet, behind the national figure sits something of an East-West divide. Youth unemployment rates are relatively low in the ACT and NSW at 9.9% and 10.3% respectively, both falling by 0.1ppt over the year to July 2018. Vic and Qld recorded falls of 0.2ppt over the year, to 12.5% and 12.9% respectively. However, the picture is somewhat different in the West, with youth unemployment rising 0.25ppt to 14.5% on latest data – the highest across all jurisdictions in mainland Australia and exceeded only by Tas, at 14.7%.