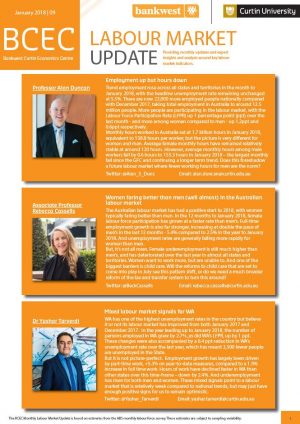 Welcome to the ninth edition of the BCEC Monthly Labour Market Update.

Key findings from January 2018 data include:

Employment up but hours down

There are now 23,000 more employed people nationally compared with December 2017, taking total employment in Australia to around 12.5 million people. Monthly hours worked in Australia sat at 1.7 billion hours in January 2018, equivalent to 138.8 hours per worker, but the picture is very different for women and men. Average female monthly hours have remained relatively stable at around 120 hours. However, average monthly hours among male workers fell by 0.6 hours to 155.3 hours in January 2018 – the largest monthly fall since the GFC and continuing a longer term trend. Does this foreshadow a future labour market where fewer working hours for men are the norm?

The Australian labour market has had a positive start to 2018, with women typically faring better than men. In the 12 months to January 2018, female labour force participation has grown at a faster rate than men’s. And unemployment rates are generally falling more rapidly for women than men. But, it’s not all roses. Female underemployment is still much higher than men’s, and has deteriorated over the last year in almost all states and territories. Women want to work more, but are unable to.

WA has one of the highest unemployment rates in the country but believe it or not its labour market has improved from both January 2017 and December 2017. But it is not picture-perfect. Employment growth has largely been driven by part-time work, +5.3% on year-to-date measures, compared to a 1.5% increase in full time work. Hours of work have declined faster in WA than
other states over this time-frame – down by 2.4%. And underemployment has risen for both men and women. These mixed signals point to a labour market that is relatively weak compared to national trends, but may just have enough positive signs for us to remain optimistic.