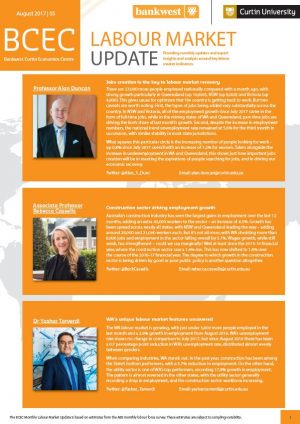 Welcome to the fifth edition of the BCEC Monthly Labour Market Update.

Key findings from August 2017 data include:

Jobs creation is the key to labour market recovery

There are 27,000 more people employed nationally compared with a month ago, with strong growth particularly in Queensland (up 10,600), NSW (up 8,000) and Victoria (up 4,000). However, the types of jobs being added vary substantially across the country and despite the increase in employment numbers, the national trend unemployment rate remained at 5.6% for the third month in succession.

Australia’s construction industry has seen the largest gains in employment over the last 12 months, adding an extra 45,000 workers to the sector – an increase of 4.3%. Growth has been spread across nearly all states, with NSW and Queensland leading the way – adding around 29,000 and 21,000 workers each. But it’s not all roses, with WA shedding more than 8,000 jobs and employment in the sector falling overall by 5.7%.