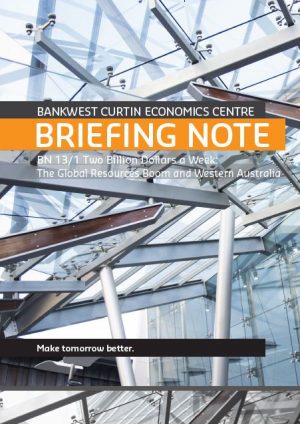 Western Australia (WA) has a long association with resource-driven growth, beginning with the Kalgoorlie gold rush of the 1890s which drew people from all over Australia and the world. That boom underpinned the rapid development of what was still a remote settlement and laid the foundations for the creation of the State. However, given its relative geographical isolation, by the 1950s WA was in danger of becoming in the words of former WA Premier Sir Charles Court, a ‘mendicant state’, dependent in large part on transfers through the national budget and the Commonwealth Grants Commission.

However, since the 1950s WA has witnessed a series of mining booms. The second major boom in WA history was the development of the Pilbara iron ore deposits in the 1960s, coupled with new developments in alumina and nickel and in the latter part of the decade and early 1970s. In the 1980s, the development of a liquefied natural gas (LNG) export industry and petroleum and condensate exports, together with a new boom in gold mining saw the state undergo another economic and population growth spurt. The current expansion (from 2004) represents WA’s exposure to the ‘super-cycle’ in mineral commodities – a global shift in prices and volumes in these markets due to growth in China, and to a lesser extent, countries such as India, Russia and Brazil (the so-called BRICs group).

The development of new resources in WA, commencing with the planning and construction for the iron ore boom in 1962, has resulted in the transformation of WA. In 1967, in the midst of initial exports of iron ore from the Pilbara, WA’s production of mineral and petroleum resources was equal to $134 million, or 1.2% of state final demand (SFD). By 1987, following the expansion of gold, nickel and alumina production, total output in minerals and petroleum equalled $6.3 billion, around 22.2% of SFD. By 2011-12, following the emergence of the ‘super cycle’, production reached $107 billion or 54% of SFD.