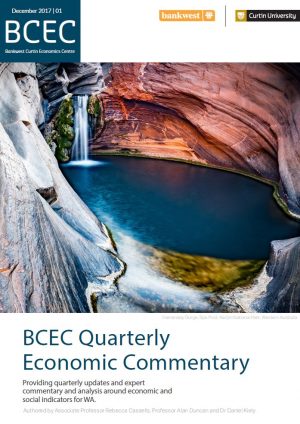 This is the first of Bankwest Curtin Economics Centre’s Western Australia Quarterly Economic Commentary analysing the most recent data on economic and social indicators for WA.

Recent Gross State Product (GSP) figures reported a 2.7% contraction in the year to June 2017, making it the only state to report negative GSP growth in the last year. This led to some siren voices crying “recession”, with accusations fired across the Nullarbor that WA was “letting Australia’s economy down” by not contributing to national GDP growth. Yet context is important. WA’s annual economic growth has averaged 4.9% during a decade of unprecedented resources-fuelled economic expansion. Despite the most recent decline, WA’s per capita GSP still sits at $90,500 – far in excess of every other state, and $20,000 above that of NSW.

The marriage between iron ore prices and interstate migration has held for more than 15 years in the West, but recent activity shows a divergence between the two. In fact, in the 2016-17 financial year, WA saw an overall population loss stemming from interstate migration of 11,760 people, while at the same time the iron ore price lifted from $69 to $92 per tonne between 2015-16 and 2016-17. The relationship clearly isn’t what it used to be.

Haven’t written your letter to Santa yet? Add ‘more upswing for 2018 please’!

Following the much documented and continuing decline in business investment, for some time now, WA has been experiencing relatively high unemployment, low wage growth and slow population growth. Together, these are keeping household consumption and retail trade growth at very low levels. While there are some indications that we are reaching the bottom, and perhaps turning the corner, looking at the results of newly released economic data is a little like taking a long drive with the kids – ‘are we there yet?’. Sustained business and consumer confidence into 2018 would be a welcome present this Christmas, leading to further employment growth, wage growth and in turn greater household consumption and retail spending. However, it will be well into 2018, and perhaps beyond, before the full fruits of such gifts will be born.