Preferences for government assistance to forced migrants: do perceptions of disadvantage matter? 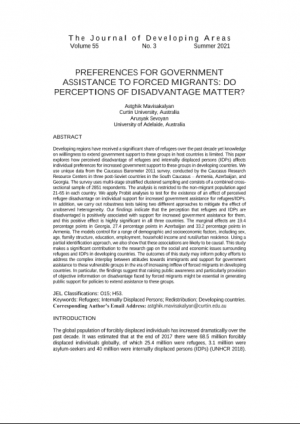 Developing regions have received a significant share of refugees over the past decade yet knowledge on willingness to extend government support to these groups in host countries is limited.

This paper explores how perceived disadvantage of refugees and internally displaced persons (IDPs) affects individual preferences for increased government support to these groups in developing countries.

We use unique data from the Caucasus Barometer 2011 survey, conducted by the Caucasus Research Resource Centers in three post-Soviet countries in the South Caucasus – Armenia, Azerbaijan, and Georgia.

The survey uses multi-stage stratified clustered sampling and consists of a combined cross-sectional sample of 2851 respondents. The analysis is restricted to the non-migrant population aged 21-65 in each country. We apply Probit analyses to test for the existence of an effect of perceived refugee disadvantage on individual support for increased government assistance for refugees/IDPs. In addition, we carry out robustness tests taking two different approaches to mitigate the effect of unobserved heterogeneity.

The models control for a range of demographic and socioeconomic factors, including sex, age, family structure, education, employment, household income and rural/urban residence.

Using a partial identification approach, we also show that these associations are likely to be causal. This study makes a significant contribution to the research gap on the social and economic issues surrounding refugees and IDPs in developing countries.

The outcomes of this study may inform policy efforts to address the complex interplay between attitudes towards immigrants and support for government assistance to these vulnerable groups in the era of increasing inflow of forced migrants in developing countries. In particular, the findings suggest that raising public awareness and particularly provision of objective information on disadvantage faced by forced migrants might be essential in generating public support for policies to extend assistance to these groups.