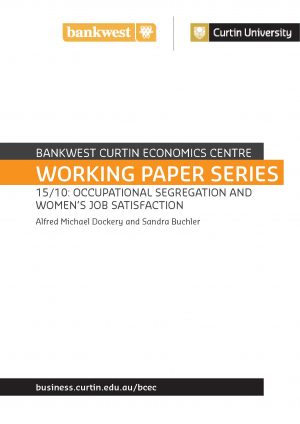 Data on men and women’s job satisfaction conditional upon the degree of feminisation of their occupation are used to explore potential causes and implications of occupational segregation by gender in the Australian labour market. We find some evidence for the notion of ‘women’s work’ ‐ that certain occupations are highly feminised because women prefer the type of work done in those occupations. However, this primarily applies to mothers, older women and wives and the results also offer strong support for the view that occupational segregation is generated by societal norms around the roles allocated to men and women. In particular, patterns in satisfaction with hours of work and with pay in highly feminised occupations are consistent with societal norms in which the work of married women and of mothers is seen as secondary to that of their male partner’s. In contrast to suggestions in some of the existing Australian literature, the results also clearly indicate that more highly feminised occupations are relatively poorly paid, other things held equal.