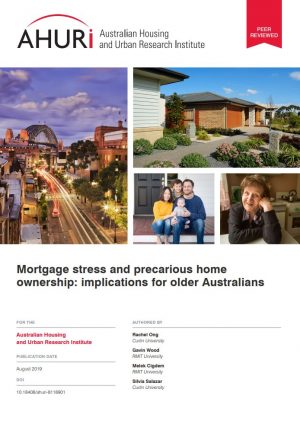 Between 1987 and 2015, the growth in mortgage debt outstripped both house price and income growth among older mortgagors (55+). Mortgage debt blew out by 600 per cent while house prices tripled. Income growth lagged even further behind, doubling over the same period.

This report, funded by the Australian Housing and Urban Research Institute (AHURI), investigates the effect of mortgage debt burden for people aged 55 years and older in terms of repayment risks, well-being and mental health outcomes, superannuation drawdowns as well as the shift in consumption patterns of this population.