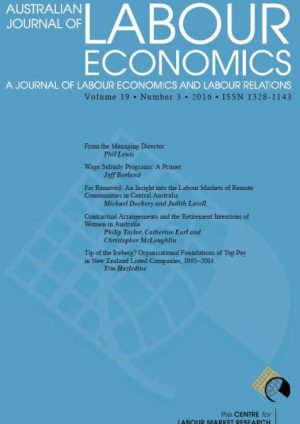 It is commonly argued that maintaining and enhancing Australia’s standard of living will require increasing the proportion of the population attaining university level qualifications in science, technology, engineering and mathematics (STEM). Accordingly, governments and universities have been proactive in encouraging women, who represent only around 30 per cent of Australians with STEM qualifications, to enter STEM courses. However, recent analyses of data from the Australian Graduate Survey found that female STEM graduates had relatively poor wage and job-match outcomes upon entering the labour market. This paper presents evidence on career outcomes for women with STEM degrees in Australia from Australian Bureau of Statistics Census data and panel data from the Household, Income and Labour Dynamics in Australia Survey (HILDA). The results provide further evidence that policies to promote female participation in STEM need to be accompanied by measures to address career barriers they face in the labour market. Women who gain STEM qualifications have lower labour market participation rates, higher unemployment rates, are relatively dissatisfied with their employment opportunities and with the extent to which their skills are utilised in their jobs compared to women with other tertiary qualifications. They also face a larger wage gap relative to men with equivalent qualifications.