Elder Care and the Employment Intentions of Mature Age Women 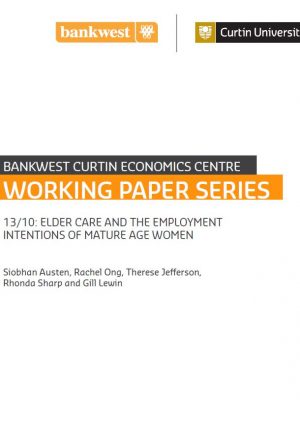 This paper addresses the employment impacts of eldercare, which we define as the informal, uncompensated care provided to elderly people. This unpaid work is a vital component of the ‘care economy’ that utilises time, emotional and other resources of family, friends and others to provide for the needs of elderly people. According to Calvero (2013), eldercare is likely to surpass childcare as a more pressing concern for organisations and their employees in coming decades. However, when compared to the extensive studies of childcare and other work-family issues, the available research evidence on its employment impacts is quite small. The importance of research into the employment impacts of eldercare can be related to three broad trends in the population and labour market. First, due to population ageing, a growing number of workers are joining the age group where eldercare roles typically arise. Second, also due to population ageing, an increased number of older people are in need of care. Third, the individuals who typically provide the majority of eldercare, namely mature age women2, are participating in paid work at an increasing rate. Thus, concerns about how to manage eldercare and paid work responsibilities and commitments are becoming important to a growing number of workers, families and organisations.