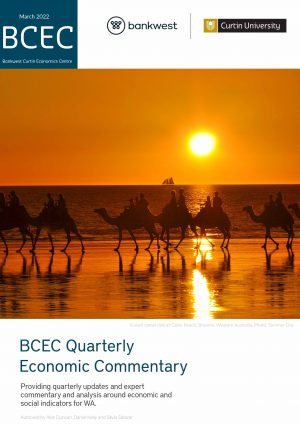 Seize the day: Border reopening presents opportunities for economic diversification, but it is not as simple as turning the tap back on.

After two years of restricted travel, isolation and countless stories of separation, the WA border has finally opened for domestic and international travellers. But the opening of the WA border brings challenges as well as opportunities; it is not as simple as turning the tap back on.

The hard border has sheltered the state from COVID-19 infections up to now, but it has also prevented most Western Australians from travelling abroad. And some of money they usually spent on international travel has been redirected towards the local retail trade and tourism sectors. Now that borders are open, there is a reasonable expectation that some of this consumption and tourism spending by WA households will leave the state as people resume travel plans, which could lead to a net spending outflow depending on the compensating flow of visitors to WA.

With the free flow of people, labour shortages will hopefully ease slightly to ease as international students make their way back to Perth and backpackers resume their travel plans. However, we will need more skilled migrants to relocate to WA from interstate or overseas to overcome the state’s short-term skilled labour shortages, yet with travel and visa arrangements taking time to complete, this won’t happen overnight. International tourism should gradually return, but needs more of the sorts of support provided by the WA government through the Tourism WA program to make up the ground lost to other states and international jurisdictions. And travel to WA from China, one of the state’s main tourism markets, will remain limited given that Chinese borders are closed.

There also remains a degree of uncertainty about how the Omicron variant will pan out across Perth and regional areas of the state, with WA experiencing its first Omicron surge at the same time as other states have overcome their second or third waves. With borders reopening and COVID-19 now in the community, any restrictions put in place will certainly have an impact on economic activity. The full extent of such impacts on consumers and businesses remains uncertain, but expect greater clarity in the weeks ahead. The more isolation is needed to keep on top of Omicron, the greater the problems in supply as well as worker disruptions. This in turn has significant repercussions for businesses that may struggle to replace personnel.

The costs of living faced by households have been rising strongly throughout the last year, with bigger price increases for non-discretionary items such as housing, food and transportation creating significant financial pressures for lower income families. Hikes in rental prices and costly construction materials have made housing more unaffordable for a significant share of the population. Moreover, the unprecedented increases in the price of petrol, up 37 per cent since last year, has not only be felt at the pump, but has cascaded to meat, vegetables and other grocery items.

Despite labour shortages driving wages growth, price inflation has more than wiped out the purchasing power of wage increases. In fact, wages have actually declined in real terms over the last three quarters, particularly in the December quarter where price inflation exceeded wages growth by 2.2 percentage points. This tendency is worrisome especially as the Ukraine and Russia conflict intensifies, putting additional upward pressure on an already strained fuel supply market.

Nevertheless, high petrol prices can also be seen as an opportunity for WA to step up. Increasing expenditures on renewable energy would decrease the dependency of the state on fossil fuels and shelter the state from unexpected prices fluctuations such as those we are experiencing now. Energy-intensive companies may also be motivated to move forward with green energy plans, with the benefits of the transition amplified now that fossil fuel prices are high.

Finally, if the unfolding geopolitical situation had taught us something in the last few weeks, it is that a high reliance on a single industry or trade partner can be dangerous. Europe is learning the lesson at a high cost. The state’s diversification strategy should encompass trading partners and supply channels as well as product diversification. The experience of empty shelves in supermarkets should remind us how quickly a situation can evolve when supply channels are compromised, and emphasise the benefits of local production instead of relying entirely on imports from over East or internationally.