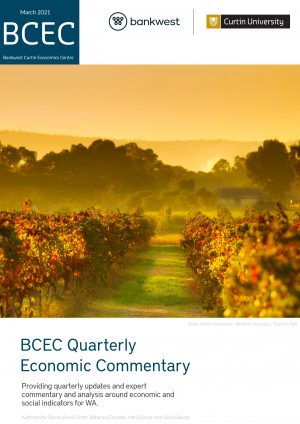 This Western Australia Quarterly Economic Commentary analyses the most recent data on economic and social indicators for WA. Key findings from this edition include:

Is the WA economy in good shape?

Western Australia is in better economic shape than any other state as it sets a course for continued recovery during 2021. And much of the state’s momentum is founded on the economic return from its success in containing COVID-19.

Retail spending in WA is stronger now than before the pandemic, with retail trade sales reaching historic highs over the last two quarters. Labour markets have bounced back strongly, with the lion’s share of jobs lost during the COVID-19 lockdown now recovered. Consumer and business confidence is high, supported by economic stimulus particularly in the construction sector. And the strength of WA’s mining sector has again afforded the state a level of protection through historically strong export values and rising business investment.

The recent release of state final demand (SFD) data for the December 2020 quarter provides the latest evidence to demonstrate the health of WA’s economy, and the strength of its recovery through the COVID-19 pandemic. After falling by 6.2% during the first three months of the pandemic, state final demand in WA grew by 5.5% in the September 2020 quarter and a further 1.5% in the final quarter of 2020.

And WA still punches well above its population weight when it comes to the size of the domestic economy. The state accounts for 10.9 per cent of national State Final Demand, for a population share of around 10.4 per cent. This represents the largest per capita SFD contribution of any state in Australia.

These headline economic indicators demonstrate that the WA economy has rebounded strongly since the pandemic, and this recovery has largely taken the shape and form of a V, which means that most parts of the economy are doing well, and in some sectors better than before the pandemic.

Some of these indicators may start to edge down again, and this to be expected as supports wind back. What we need to see is sustained growth.

However, there are also a number of risks and challenges up ahead. We see three key challenges outside of further virus outbreaks and lockdowns eroding business and consumer confidence.

What are the challenges that lie ahead for the WA economy?

One of the shorter-term challenges facing the state are skills shortages and labour market mismatches. This was highlighted in our recent labour market update, with the internet vacancy index the highest it has been since 2012 in WA, yet employment falling and the unemployment rate remaining flat at 6.2%. Skills shortages have been raised as an issue by many WA small businesses in our recent BCEC Small Business Survey, with around four in ten small business owners having more trouble finding workers now compared to a pre-COVID environment. This was as high as 51 per cent for businesses in the accommodation and food services and manufacturing industries, and 44 per cent in the construction sector – the state’s second biggest employer.

Both interstate and international border closures restricting labour mobility, combined with significant stimulus in the construction sector are all likely to be having an impact on these

challenges. Labour isn’t as mobile as it needs to be and this has consequences for production and business operations – particularly those that are competing for labour within a set timeframe.

There has been a small increase in population as residents returned home from interstate and overseas, but longer-term population growth will place downward pressure on the economy. Since 2013, population growth in WA had fallen substantially – this had a flow on effect to other parts of the economy, particularly the construction sector, with little demand for new residential dwellings.

Population growth picked up between 2017 and 2019 reaching national trend growth of around 1.6%, but it is now expected to halve to 0.8% in the coming financial year, and will be almost entirely driven by births and deaths. Continued low population growth will have an ongoing impact on particular sectors – especially construction – and will ultimately constrain more sustainable growth patterns.

Industry diversification is a conversation that we have been having for some time in WA, and despite some efforts to address this, the WA economy has become more reliant on Mining. In fact, the WA economy is now more concentrated than it has ever been in the last 27 years. WA is a Mining state, but this level of industry concentration poses a risk, and commits the economy to boom-bust cycles.

WA’s trading partners have also become less diversified with China dominating our export markets. The concentration of WA’s exports to a small number of countries has also meant that WA is more vulnerable to geopolitical tensions and economic shocks within these countries. China not only imports 80% of WA’s iron ore, but, with the exception of gold, China ranks among the top three destinations for WA’s main commodity exports which include barley, canola, wheat, wool, Alumina and petroleum. Recent trade tensions have largely impacted the agriculture sector, but these episodes further highlight the need for greater diversification – both in commodities and in export markets.