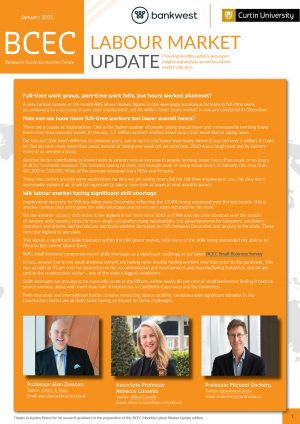 A very curious feature of the recent ABS labour market figures is that seemingly anomalous increase in full-time work,
accompanied by a decrease in part-time employment, yet 86 million fewer hours worked in January compared to December.

How can we have more full-time workers but lower overall hours?

There are a couple of explanations. One is the higher number of people taking annual leave and consequently working fewer hours than they normally would. In January, 3.7 million workers worked fewer hours than usual due to taking leave.

But this isn’t that much different to previous years, and in fact is a lot lower than many, where it reached over 5 million. It could be that we took more leave than usual, instead of taking one week off, we took two. 2020 was a tough year and by Januarymany of us needed a break.

Another factor contributing to lower hours in January was an increase in people working fewer hours than usual, or no hours at all for ‘economic reasons’. This includes having no work, not enough work or being stood down. In January, this rose from 461,000 to 518,000. Most of the increase stemmed from NSW and Victoria.

These two factors provide some explanation for why we are seeing hours fall but full-time employment rise, but they don’t necessarily explain it all. It will be important to take a close look at hours in next month’s survey.

Employment recovery for WA has fallen since December, reflecting the 13,400 fewer employed over the last month. This is another curious data point given the skills shortages and job vacancy rates reported for the state.

Yet the internet vacancy data index is the highest it has been since 2012 and WA was the clear standout over the month of January, with vacancy rates for every single occupation rising substantially. Job advertisements for labourers, machinery operators and drivers, and technicians and trade workers increased by 10% between December and January in the state. These were the highest of any state.

This signals a significant skills mismatch within the WA labour market, with many of the skills being demanded not able to be filled by the current labour force.

In fact, around four in ten small business owners are having more trouble finding workers now than prior to the pandemic. This was as high as 51 per cent for businesses in the accommodation and food services and manufacturing industries, and 44 per cent in the construction sector – one of the state’s biggest employers.

Skills shortages are proving to be especially acute in the Pilbara, where nearly 80 per cent of small businesses finding it hard to source workers, along with more than half of businesses in Goldfields-Esperance and the Kimberley.

Both interstate and international border closures restricting labour mobility, combined with significant stimulus in the construction sector are all likely to be having an impact on these challenges.