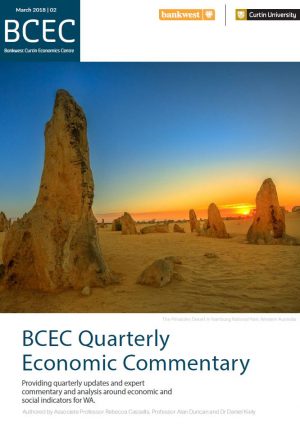 This Western Australia Quarterly Economic Commentary analyses the most recent data on economic and social indicators for WA, as at the end of Q1 2018.

This quarter we have re-highlighted the importance of mining and China for the WA economy, and include a special feature on homelessness in Western Australia.

Positioning for Growth in an Evolving World Order

The latest economic data provide us with increasing confidence that the WA economy is on a modest positive growth trajectory. State Final Demand growth has averaged 0.5% over the last four quarters, 0.6% for the most recent December 2017 quarter. Should such growth patterns continue in the first two quarters of 2018, WA is likely to return to positive, albeit meek, GSP growth for the 2017-18 FY.

As the season turns to Autumn in WA, Easter provided a good time to reflect on new growth. 2018 is a critical year for the WA economy, both in terms of managing the state finances, and laying the foundations for future growth – a difficult juggling act. .

WA labour market lagging behind and in need of stimulus

The strength of an economy is often reflected in the number of cranes visible across the city skyline – or in WA, the number of ships off the coast of Fremantle. While the mining sector continues to anchor the State’s economy, the construction sector has been on a downward spiral with housing finance commitments down 10.4% in the last year compared to growth of 0.1% for Australia, and significant jobs losses in the sector in recent times.

Although the WA economy has made up some good ground over the last year or so, there are still signs that a substantial stimulus is needed to lift it up over the last hurdle and back into the main race – and towards full-time employment.

Homelessness – a persistent and growing problem across WA regions

Appropriate housing is an essential first step in supporting those who are homeless or are at risk of becoming homeless. Homelessness can touch all people in our society, and across all age groups, gender and ethnicity. Amongst others, it is associated with other social issues faced by our society, such as domestic violence, physical and mental health problems, and substance abuse. While our State is in a difficult fiscal position, supporting the most vulnerable in our society should be front and centre, with continued and growing support needed for service provision and delivery.