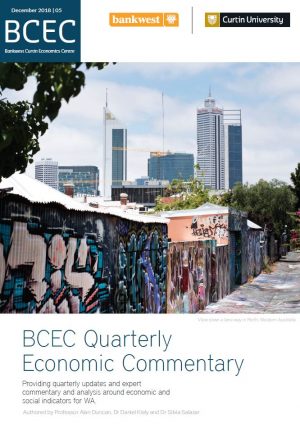 This Western Australia Quarterly Economic Commentary analyses the most recent data on economic and social indicators for WA, as at Q4 2018.

This quarter we we see that the WA economy has returned to positive growth, driven by the strength of a number of key sectors. However, consumer confidence, wage and population growth remain weak. New mining investment, coupled with potential population growth in 2019, may also provide a much needed stimulus for the housing and construction sectors.

Global uncertainty and economic diversification – Things to watch for in 2019

Recently released data shows that the WA economy has returned to positive growth, as we forecast in previous BCEC QEC updates. The Mining sector has been a major contributor to WA’s recovery, and to the State’s strong export position. But the Manufacturing, Construction and Finance and Insurance services sectors are also playing their part in the pathway to recovery, while the growing importance of the State’s expanding Health Care and Social Assistance sector, with annual growth of 8.8% in economic value and 16,000 more jobs over the last year, cannot be ignored.

On an annual basis, business investment has returned to modest but positive growth for the first time in five years. Coupled with the recent GST win for WA and improvements in WA’s unemployment figures, the McGowan Government will draw confidence from these latest economic figures as they seek to steer the WA economy back to full strength.

Please sir, can we have some more?

In terms of the domestic economy, consumer confidence in WA remains weak, with the retail and construction sectors continuing to feel the pain. With a 42% share of the State economy, stronger growth in household consumption is critical to growth and employment creation. But, this in turn is dependent on strong wage and population growth, both of which remain weak for WA, with continual declines in housing finance and a related weakness in the housing market adding to the drag.

Australia has now accumulated twelve consecutive months of negative growth in housing finance commitments, averaging -0.8%. This is driven by tightened lending in the mortgage sector. What initially started in the less populated states of WA, SA and Qld, has recently propagated to NSW. The decline in housing finance commitment has naturally translated into an overall decline in demand for housing, leading to stagnation of new dwelling prices.