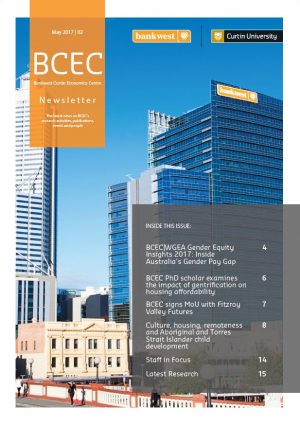 Welcome to the second edition of the tri-annual BCEC Newsletter. We have had an incredibly busy start to 2017, with the Centre continuing to deliver research that seeks to improve the lives of West Australians.

We commenced the year with the launch of the second iteration in the BCEC|WGEA Gender Equity Insights series, which revealed that greater gender balance in leadership drives reduced gender pay gaps across Australian companies. BCEC’s partnership with the Workplace Gender Equality Agency pursues a common goal of improving gender equality throughout Australian workplaces. This valuable research has since led to an invitation to appear at the Senate Inquiry into Gender Segregation in the Workplace, which Professor Alan Duncan and Associate Professor Rebecca Cassells attended in April.

BCEC has also continued to make important contributions to one of the most pressing economic and social issues of our time – housing affordability. This research agenda, led by Deputy Director Professor Rachel Ong, and framed by BCEC’s partnership with the Australian Housing and Urban Research Institute has seen the quality of the evidence base around housing affordability lifted substantially and continued pressure on policy makers to act. Recently, Rachel addressed the National Press Club in Canberra on the issue of housing affordability and the policies presented in the 2017-18 Federal Budget.

We also congratulate our incredibly hardworking administrative team, who in March were awarded the 2016 Curtin Business School Professional Staff Team Award. The Professional team is the backbone of the Centre and this award is testament to the important role they play in the Centre’s activities.