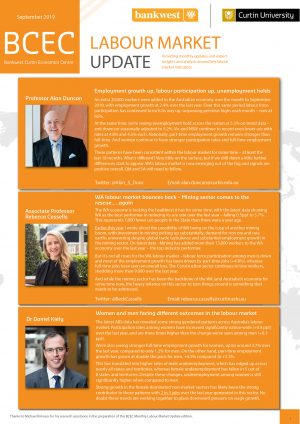 Key findings from September 2019 data include:

An extra 20,000 workers were added to the Australian economy over the month to September 2019, with employment growing by 2.4% over the last year. Labour force participation has continued to inch its way up, surpassing previous highs each month – now at 66%. At the same time, we’re seeing unemployment hold across the nation at 5.3% on trend data – and improve by 0.1ppt to 5.2% over the last month on a seasonally adjusted measure. Nationally, women continue to have stronger participation rates and full-time employment growth.

But there are some discordant notes that jar with an otherwise positive tune.

The signs of labour market recovery across much of the country have been reasonably consistent for some time – certainly the last 18 months. WA’s labour market is now emerging out of the fog and signals are positive overall, but QLD and SA will need to follow.

The WA economy is looking the healthiest it has for some time, with the latest data showing WA as the best performer in reducing its unemployment rate over the last year – falling 0.5ppt to 5.7%. This represents 7,000 fewer unemployed people in the State than a year ago.

Earlier this year I wrote about the possibility of WA being on the cusp of another mining boom, with investment in mining picking up substantially, demand for iron ore and rare earths unwavering despite global trade turbulence and substantial employment growth in the mining sector.

On latest data – Mining has added more than 13,000 workers to the WA economy over the last year – the top industry performer.

But it’s not all roses for the WA labour market – labour force participation among men is down and most of the employment growth has been driven by part-time jobs (+4.8%), whereas full-time jobs have seen an overall loss. The Construction sector continues to lose workers, shedding more than 9,000 over the last year.

And while the mining sector has been the backbone of the WA (and Australia’s) economy for some time now, the heavy reliance on this sector to turn things around is something that needs to be addressed.

The latest ABS data reveals some strong gendered patterns across Australia’s labour market. Participation rates among women have increased significantly nation-wide (+0.9 ppt) over the last year, and are three times higher than the change we’ve seen among men (+0.3 ppt).

Strong growth in the female dominated ‘non-market’ sectors has likely been the strong contributor to these patterns with 2 in 3 jobs over the last year generated in this sector. No doubt these trends are working together to place downward pressure on wage growth.