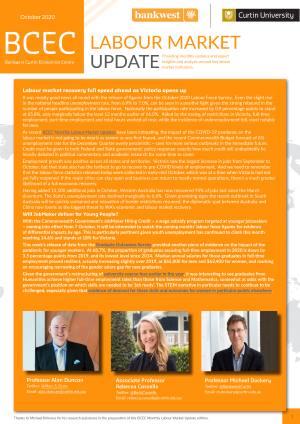 Labour Market Recovery full speed ahead as Victoria opens up

It was mostly good news all round with the release of figures from the October 2020 Labour Force Survey.  Even the slight rise in the national headline unemployment rate, from 6.9% to 7.0%, can be seen in a positive light given the strong rebound in the number of people participating in the labour force.  Nationally the participation rate increased by 0.9 percentage points to stand at 65.8%, only marginally below the level 12 months earlier of 66.0%.  Aided by the easing of restrictions in Victoria, full-time employment, part-time employment and total hours worked all rose, while the incidence of underemployment fell, most notably for men.

As recent BCEC Monthly Labour Market Updates have been intimating, the impact of the COVID-19 pandemic on the labour market is not going to be nearly as severe as was first feared, and the recent Commonwealth Budget forecast of 8% unemployment rate for the December Quarter overly pessimistic – save for more serious outbreaks in the immediate future.  Credit must be given to both Federal and State governments’ policy response: exactly how much credit will undoubtedly be heavily debated in political commentary and academic research for some time to come.

Employment growth was positive across all states and territories.  Victoria saw the largest increase in jobs from September to October, but that state also has the farthest to go to recover to pre-COVID levels of employment.  And we need to remember that the labour force statistics released today were collected in early-mid October, which was at a time when Victoria had not yet fully reopened. If the major cities can stay open and business can return to mostly normal operations, there’s a much greater likelihood of a full economic recovery.

Having added 15,300 additional jobs in October, Western Australia has now recovered 93% of jobs lost since the March downturn. The State’s unemployment rate declined marginally to 6.6%.  Given promising signs the recent outbreak in South Australia will be quickly contained and relaxation of border restrictions resumed, the diplomatic spat between Australia and China now looms as the biggest threat to WA’s economic and labour market recovery.

Will JobMaker deliver for Young People?

With the Commonwealth Government’s JobMaker Hiring Credit – a wage subsidy program targeted at younger jobseekers – coming into effect from 7 October, it will be interesting to watch the coming months’ labour force figures for evidence of differential impacts by age. This is particularly pertinent given youth unemployment has continued to climb this month reaching 14.6% and stands at 18% for Victoria.

This week’s release of data from the Graduate Outcomes Survey provided another piece of evidence on the impact of the pandemic for younger workers.  At 68.7%, the proportion of graduates securing full-time employment in 2020 is down by 3.5 percentage points from 2019, and its lowest level since 2014.  Median annual salaries for those graduates in full-time employment proved resilient, actually increasing slightly over 2019, at $65,000 for men and $63,400 for women, and marking an encouraging narrowing of the gender salary gap for new graduates.

Given the government’s restructuring of university course fees earlier in the year, it was interesting to see graduates from Humanities achieve higher full-time employment rates than those from Science and Mathematics, somewhat at odds with the government’s position on which skills are needed to be ‘job ready’. The STEM narrative in particular needs to continue to be challenged, especially given that evidence of demand for these skills and outcomes for women in particular points elsewhere.