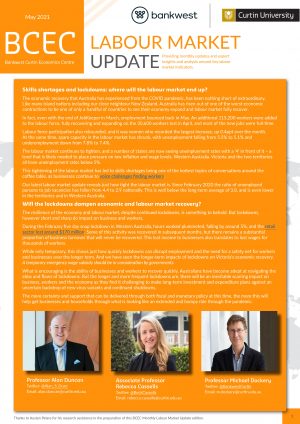 Skills shortages and lockdowns: where will the labour market end up?

The economic recovery that Australia has experienced from the COVID pandemic, has been nothing short of extraordinary. Like many island nations including our close neighbour New Zealand, Australia has risen out of one of the worst economic contractions to be one of only a handful of countries to see their economy expand and labour market fully recover.

In fact, even with the end of JobKeeper in March, employment bounced back in May. An additional 115,200 workers were added to the labour force, fully recovering and expanding on the 30,600 workers lost in April, and most of the new jobs were full-time.

Labour force participation also rebounded, and it was women who recorded the largest increase, up 0.4ppt over the month. At the same time, spare capacity in the labour market has shrunk, with unemployment falling from 5.5% to 5.1% and underemployment down from 7.8% to 7.4%.

The labour market continues to tighten, and a number of states are now seeing unemployment rates with a ‘4’ in front of it – a level that is likely needed to place pressure on low inflation and wage levels. Western Australia, Victoria and the two territories all have unemployment rates below 5%.

This tightening of the labour market has led to skills shortages being one of the hottest topics of conversations around the coffee table, as businesses continue to voice challenges finding workers.

Our latest labour market update reveals just how tight the labour market is. Since February 2020 the ratio of unemployed persons to job vacancies has fallen from 4.4 to 2.9 nationally. This is well below the long-term average of 3.8, and is even lower in the territories and in Western Australia.

Will the lockdowns dampen economic and labour market recovery?

The resilience of the economy and labour market, despite continued lockdowns, is something to behold. But lockdowns, however short and sharp do impact on business and workers.

During the February five day snap lockdown in Western Australia, hours worked plummeted, falling by around 5%, and the retail sector lost around $170 million. Some of this activity was recovered in subsequent months, but there remains a substantial proportion of business turnover that will never be recovered. This lost income to businesses also translates to lost wages for thousands of workers.

While only temporary, this shows just how quickly lockdowns can disrupt employment and the need for a safety net for workers and businesses over the longer term. And we have seen the longer-term impacts of lockdowns on Victoria’s economic recovery.  A temporary emergency wage subsidy should be in consideration by governments.

What is encouraging is the ability of businesses and workers to recover quickly. Australians have become adept at navigating the ebbs and flows of lockdowns. But the longer and more frequent lockdowns are, the greater the chances of permanent scarring on business, workers and the economy.

Private capital investment lifted by 11.5% in the March 2021 quarter, bolstered by government support measures and a returning confidence in the strength of our economic recovery. However, confidence can erode just as quickly, and businesses may well find it challenging to make long-term investment and expenditure plans against an uncertain backdrop of new virus variants and continued shutdowns.

The more certainty and support that can be delivered through both fiscal and monetary policy at this time, the more this will help get businesses and households through what is looking like an extended and bumpy ride through the pandemic.