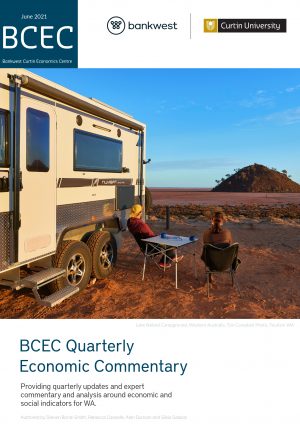 The positive economic growth figures are reflective of the continued strength of the state’s domestic economy and its resilience to the COVID-19 pandemic. The result is especially pleasing given the period covers the five-day lockdown at the start of February.

The state’s improved economic performance over the second half of 2020 was driven by a strong recovery in household consumption, supported by electricity credits, the JobKeeper wage subsidy, business grants and tax offsets, and housing stimulus measures. But for the first quarter of 2021, the main contributor to WA’s continued economic growth has pivoted towards private investment.

In common with other states, Western Australia has faced a prolonged period of sluggish business investment growth stretching back to the end of the mining boom.

However, the big story for the March 2021 quarter has been the extent to which business investment has taken off. Business investment alone rose 11.5 per cent over the quarter, and the growth in private capital accounted for more than 80 per cent of the overall growth in the state’s domestic economy in the first quarter of 2021.

New investment in machinery and equipment has risen by an extraordinary 21.5 per cent in WA over the March 2021 quarter, in the form of vehicles, heavy machinery, farm equipment, and new capital to support engineering construction in the mining sector.

These findings suggest that Federal incentives to encourage capital investment look to be working. The instant asset write-off scheme, extended by a year in the Federal budget, allows businesses to claim tax deductions immediately for assets acquired before the end of the 2022-23 financial year.

Against a background of high commodity prices and low interest rates, these favourable tax incentives look to have further boosted confidence among businesses to commit to invest to capitalise on growing consumer demand both at home and overseas.

The WA government’s investment spending also grew by 4.5 per cent in the March 2021 quarter, up from 1.2 per cent in the previous quarter. However, the WA government set a budget target of 18 per cent growth in public investment over the 2020-21 financial year. This target won’t be achieved unless we see double-digit growth over the final June quarter of the financial year, which is unlikely.

What impact did the February snap lockdown have on WA’s retailers?

Western Australia’s retail turnover fell by 1.8 per cent during the March quarter, from $9.6 billion to $9.44 billion. Of course, the March quarter included a snap five-day lockdown in February 2021, and monthly retail figures show that overall retail turnover in the state dropped by $173 million to just over $3 billion in February, before recovering to $3.2 billion in March.

If we compare the retail figures for February to typical monthly turnover in WA over the last six months, with suitable adjustment for seasonal trends, this suggests that the cost to retailers of the February lockdown amounted to around $170 million.

Clothing and footwear retailers were affected most by the snap February lockdown, with turnover down $36.6 million on expectations, and with little if any bounce-back in trade during March.  February turnover was down more than $20 million for household goods retailers, and so too for department stores, with no significant recovery of lost trade value in later months.

Cafes, restaurants and takeaway food retailers also took a February hit, with turnover falling by around $34 million. However, these turnover losses were almost entirely recovered in March once lockdown measures were relaxed and consumers returned to public venues.

Health is the prime concern when it comes to managing the COVID-19 pandemic, but these findings nevertheless put some indicative value on the cost to WA’s retail sector of lockdowns in the state.

Some of the heat may be coming off the housing market

New housing finance commitments to WA owner occupiers fell in April, for the first time since the announcements of the HomeBuilder and Building bonus grants. Coming off an historic peak in February 2021, the value of housing finance commitments fell by 5.1 per cent in March and by a further 7.9 per cent in April. On the other hand, the value of housing loans to WA’s investors reached $452 million in April 2021, the highest monthly commitment over the past five years.

These data suggest that some of the heat may be coming off WA’s housing market. The exceptional demand for housing finance, incentivised by the housing stimulus packages, seems to be moderating slightly. But the value of housing loans to investors is still on the rise, which provides encouragement that the growth in housing investment activity in WA will continue into the latter half of the year.

WA’s labour force shrinks as JobKeeper comes to an end

However, like all unemployment figures in April, they need to be contextualised by falling participation rates, with thousands of workers leaving the labour market altogether as JobKeeper came to an end. In April, WA lost over 14,000 workers from employment and the labour force shrunk by around 17,000 people.

Many of these workers may re-enter the labour market, with labour demand at a ten year high. In fact job vacancies were 19.9 per cent higher in April 2021 than at the start of the year, with increases across every major occupation group. However, matching workers with jobs remains an ongoing challenge for many of the state’s businesses.