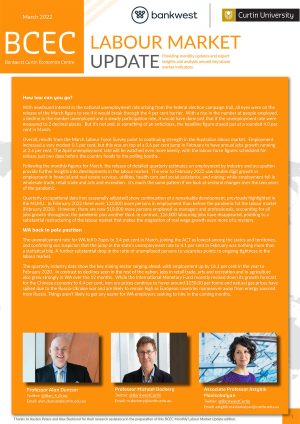 How low can you go?

With newfound interest in the national unemployment rate arising from the federal election campaign trail, all eyes were on the release of the March figure to see if it would break through the 4 per cent barrier. With a rise in the number of people employed, a decline in the number unemployed and a steady participation rate, it would have done just that if the unemployment rate were measured to 2 decimal places. But it’s not and, in something of an anticlimax, the headline figure stayed put at a rounded 4.0 per cent in March.

Overall, results from the March Labour Force Survey point to continuing strength in the Australian labour market. Employment increased a very modest 0.1 per cent, but this was on top of a 0.6 per cent jump in February to have annual jobs growth running at 2.6 per cent. The April unemployment rate will be watched even more keenly, with the labour force figures scheduled for release just two days before the country heads to the polling booths.

Following the monthly figures for March, the release of detailed quarterly estimates on employment by industry and occupation provide further insights into developments in the labour market. The year to February 2022 saw double digit growth in employment in financial and real estate services, utilities, health care and social assistance, and mining; while employment fell in wholesale trade, retail trade and arts and recreation. It’s much the same pattern if we look at sectoral changes over the two years of the pandemic.

In February 2022 there were 384,000 more persons in employment than before the pandemic hit the labour market (February 2020). However, there are now 510,000 more persons employed as managers and professionals, accounting for all jobs growth throughout the pandemic plus another third. In contrast, 116,000 labouring jobs have disappeared, pointing to a substantial restructuring of the labour market that makes the stagnation of real wage growth even more of a mystery.

WA back in pole position

The unemployment rate for WA fell 0.7ppts to 3.4 per cent in March, joining the ACT as lowest among the states and territories, and confirming our suspicion that the jump in the state’s unemployment rate to 4.1 per cent in February was nothing more than a statistical blip. A further substantial drop in the ratio of unemployed persons to vacancies points to ongoing tightness in the labour market.

The quarterly industry data show the key mining sector surging ahead, with employment up by 16.1 per cent in the year to February 2022. In contrast to declines seen in the rest of the nation, jobs in retail trade, arts and recreation and in agriculture also grew strongly in WA over the 12 months. While the International Monetary Fund recently revised down its growth forecast for the Chinese economy to 4.4 per cent, iron ore prices continue to hover around $150.00 per tonne and natural gas prices have spiked due to the Russia-Ukraine war and are likely to remain high as European countries manoeuvre away from energy sourced from Russia. Things aren’t likely to get any easier for WA employers seeking to hire in the coming months.