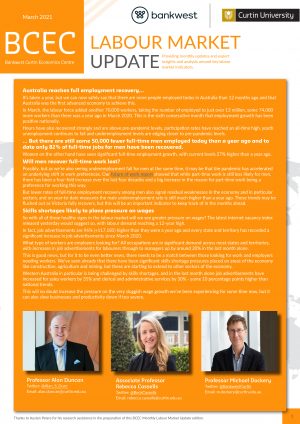 It’s taken a year, but we can now safely say that there are more people employed today in Australia than 12 months ago and that Australia was the first advanced economy to achieve this.

In March, the labour force added another 70,000 workers, taking the number of employed to just over 13 million, some 74,000 more workers than there was a year ago in March 2020. This is the sixth consecutive month that employment growth has been positive nationally.

…But there are still some 50,000 fewer full-time men employed today than a year ago and to date only 82% of full-time jobs for men have been recovered.

Women on the other hand have seen significant full-time employment growth, with current levels 27% higher than a year ago.

Possibly, but as we’re also seeing underemployment fall for men at the same time, it may be that the pandemic has accelerated an underlying shift in work preferences. Our future of work report showed that while part-time work is still less likely for men, there has been a four-fold increase over the last four decades and a big increase in the reason for part-time work being a preference for working this way.

But lower rates of full-time employment recovery among men also signal residual weaknesses in the economy and in particular sectors, and on year-to-date measures the male underemployment rate is still much higher than a year ago. These trends may be flushed out as Victoria fully recovers, but this will be an important indicator to keep track of in the months ahead.

So with all of these healthy signs in the labour market will we see greater pressure on wages? The latest internet vacancy index released yesterday would suggest so, with labour demand reaching a 12-year high.

What type of workers are employers looking for? All occupations are in significant demand across most states and territories, with increases in job advertisements for labourers through to managers up by around 20% in the last month alone.

This is good news, but for it to be even better news, there needs to be a match between those looking for work and employers needing workers. We’ve seen already that there have been significant skills shortage pressures placed on areas of the economy like construction, agriculture and mining, but these are starting to extend to other sectors of the economy.

Western Australia in particular is being challenged by skills shortages, and in the last month alone job advertisements have increased for sales workers by 35% and clerical and administrative services by 30% – some 10 percentage points higher than national trends.

This will no doubt increase the pressure on the very sluggish wage growth we’ve been experiencing for some time now, but it can also slow businesses and productivity down if too severe.