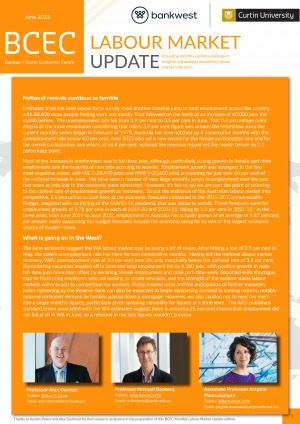 Estimates from the June labour force survey show another sizeable jump in total employment across the country, with 88,400 more people finding work last month. That followed on the heels of an increase of 60,000 jobs the month before. The unemployment rate fell from 3.9 per cent to 3.5 per cent in June. That 0.4 percentage point drop is all the more remarkable considering that May’s 3.9 per cent figure was already the record low since the current monthly series began in February of 1978. Australia has now notched up 4 consecutive months with the unemployment rate below 4.0 per cent. June 2022 also set a new record for the female participation rate and for the overall participation rate which, at 66.8 per cent, eclipsed the previous record set the month before by 0.1 percentage point.

Most of the increase in employment was in full-time jobs, although particularly strong growth in female part-time employment saw the majority of new jobs accruing to women. Employment growth was strongest in the two most populous states, with VIC (+28,400 jobs) and NSW (+25,600 jobs) accounting for just over 60 per cent of the national increase in June. We have seen a number of very large monthly jumps in employment over the past two years as jobs lost in the pandemic were reinstated. However, it’s fair to say we are past the point of referring to the current rate of employment growth as ‘recovery’. To put the resilience of the Australian labour market into perspective, it’s instructive to look back at the economic forecasts contained in the 2019-20 Commonwealth Budget, prepared with no inkling of the COVID-19 pandemic that was about to unfold. Those forecasts were for employment growth of 1.75 per cent in each of 2019-20 and 2020-21, falling to 1.5 per cent in 2021-22. In the three years from June 2019 to June 2022, employment in Australia has actually grown at an average of 1.87 per cent per annum: easily surpassing the budget forecasts despite the economy being hit by one of the largest economic shocks of modern times.

What is going on in the West?

The June estimates suggest the WA labour market may be losing a bit of steam. After hitting a low of 2.9 per cent in May, the state’s unemployment rate has risen for two consecutive months. Having led the national labour market recovery, WA’s unemployment rate of 3.4 per cent now sits only marginally below the national rate of 3.5 per cent. Skyrocketing vacancies levelled off in June and total employment fell by 9,100 jobs, with positive growth in male full-time jobs more than offset by declining female employment and male part-time work. Reported skills shortages may be frustrating employers who are looking to create new jobs, and the strength of the eastern states labour markets will only add to competition for workers. Rising interest rates and the anticipation of further monetary policy tightening by the Reserve Bank can also be expected to begin dampening demand in coming months, notably reduced consumer demand by families paying down a mortgage. However, we also caution not to read too much into a single month’s figures, particularly given sampling variability for figures at a state level. The ABS’ published standard errors associated with the WA estimates suggest there is around a 25 per cent chance that employment did not fall at all in WA in June, so a rebound in the July figures wouldn’t surprise.