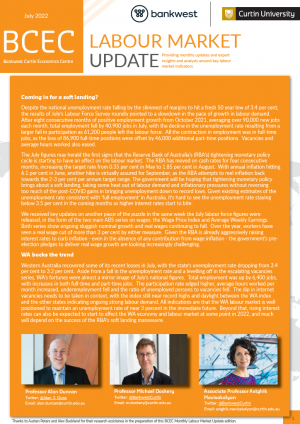 Coming in for a soft landing?

Despite the national unemployment rate falling by the slimmest of margins to hit a fresh 50 year low of 3.4 per cent, the results of July’s Labour Force Survey roundly pointed to a slowdown in the pace of growth in labour demand. After eight consecutive months of positive employment growth from October 2021, averaging over 90,000 new jobs each month, total employment fell by 40,900 jobs in July, with the decline in the unemployment rate resulting from a larger fall in participation as 61,200 people left the labour force. All the contraction in employment was in full-time jobs, as the loss of 86,900 full-time positions were offset by 46,000 additional part-time positions. Vacancies and average hours worked also eased.

The July figures may herald the first signs that the Reserve Bank of Australia’s (RBA’s) tightening monetary policy cycle is starting to have an effect on the labour market. The RBA has moved on cash rates for four consecutive months, increasing the target rate from 0.35 per cent in May to 1.85 per cent in August. With annual inflation hitting 6.1 per cent in June, another hike is virtually assured for September, as the RBA attempts to reel inflation back towards the 2-3 per cent per annum target range. The government will be hoping that tightening monetary policy brings about a soft landing, taking some heat out of labour demand and inflationary pressures without reversing too much of the post-COVID gains in bringing unemployment down to record lows. Given existing estimates of the unemployment rate consistent with ‘full employment’ in Australia, it’s hard to see the unemployment rate staying below 3.5 per cent in the coming months as higher interest rates start to bite.

We received key updates on another piece of the puzzle in the same week the July labour force figures were released, in the form of the two main ABS series on wages: the Wage Price Index and Average Weekly Earnings. Both series show ongoing sluggish nominal growth and real wages continuing to fall. Over the year, workers have seen a real wage cut of more than 3 per cent by either measure. Given the RBA is already aggressively raising interest rates to curb inflation – even in the absence of any contribution from wage inflation – the government’s preelection pledges to deliver real wage growth are looking increasingly challenging.

Western Australia recovered some of its recent losses in July, with the state’s unemployment rate dropping from 3.4 per cent to 3.2 per cent. Aside from a fall in the unemployment rate and a levelling off in the escalating vacancies series, WA’s fortunes were almost a mirror image of July’s national figures. Total employment was up by 6,400 jobs, with increases in both full-time and part-time jobs. The participation rate edged higher, average hours worked per month increased, underemployment fell and the ratio of unemployed persons to vacancies fell. The dip in internet vacancies needs to be taken in context, with the index still near record highs and daylight between the WA index and the other states indicating ongoing strong labour demand. All indications are that the WA labour market is well positioned to maintain an unemployment rate of near 3 percent in the immediate future. Beyond that, rising interest rates can also be expected to start to affect the WA economy and labour market at some point in 2022, and much will depend on the success of the RBA’s soft landing manoeuvre.