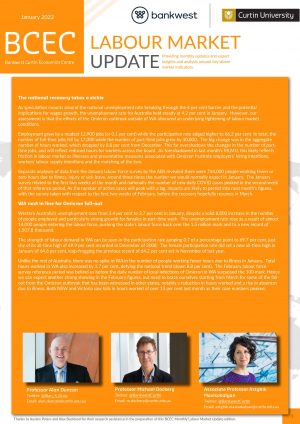 The national recovery takes a sickie

As speculation mounts around the national unemployment rate breaking through the 4 per cent barrier and the potential implications for wages growth, the unemployment rate for Australia held steady at 4.2 per cent in January.  However, our assessment is that the effects of the Omicron outbreak outside of WA obscured an underlying tightening of labour market conditions.

Employment grew by a modest 12,900 jobs (or 0.1 per cent) while the participation rate edged higher to 66.2 per cent. In total, the number of full-time jobs fell by 17,000 while the number of part-time jobs grew by 30,000.  The big change was in the aggregate number of hours worked, which dropped by 8.8 per cent from December. This far overshadows the changes in the number of part-time jobs, and will reflect reduced hours for workers across the board.  As foreshadowed in last month’s MLMU, this likely reflects friction in labour market as illnesses and preventative measures associated with Omicron frustrate employers’ hiring intentions, workers’ labour supply intentions and the matching of the two.

Separate analyses of data from the January labour force survey by the ABS revealed there were 744,000 people working fewer or zero hours due to illness, injury or sick leave, around three times the number we would normally expect in January.  The January survey related to the first two weeks of the month and nationally the number of new daily COVID cases peaked in the second week of that reference period. As the number of active cases will peak with a lag, impacts are likely to persist into next month’s figures, with the survey taken with respect to the first two weeks of February, before the recovery hopefully resumes in March.

WA next in line for Omicron fall-out

Western Australia’s unemployment rose from 3.4 per cent to 3.7 per cent in January, despite a solid 8,800 increase in the number of people employed and particularly strong growth for females in part-time work.  The unemployment rate rose as a result of almost 14,000 people entering the labour force, pushing the state’s labour force back over the 1.5 million mark and to a new record of 1,507.8 thousand.

The strength of labour demand in WA can be seen in the participation rate jumping 0.7 of a percentage point to 69.7 per cent, just shy of its all-time high of 69.9 per cent recorded in December of 2008.  The female participation rate did set a new all-time high in January of 64.6 per cent, leap-frogging the previous record of 64.2 per cent set in November of last year.

Unlike the rest of Australia, there was no spike in WA in the number of people working fewer hours due to illness in January.  Total hours worked in WA also increased by 1.7 per cent, defying the national trend (down 8.8 per cent).  The February labour force survey reference period was behind us before the daily number of local infections of Omicron in WA surpassed the 100 mark. Hence we can expect another strong showing in the February figures, but need to brace ourselves starting from March for some of the fall-out from the Omicron outbreak that has been witnessed in other states, notably a reduction in hours worked and a rise in absences due to illness. Both NSW and Victoria saw falls in hours worked of over 13 per cent last month as their case numbers peaked.