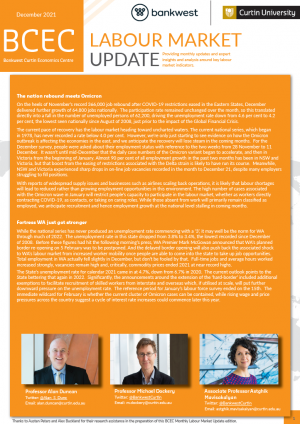 The nation rebound meets Omicron
On the heels of November’s record 366,000 job rebound after COVID-19 restrictions eased in the Eastern States, December delivered further growth of 64,800 jobs nationally. The participation rate remained unchanged over the month, so this translated directly into a fall in the number of unemployed persons of 62,200, driving the unemployment rate down from 4.6 per cent to 4.2 per cent, the lowest seen nationally since August of 2008, just prior to the impact of the Global Financial Crisis.

The current pace of recovery has the labour market heading toward uncharted waters. The current national series, which began in 1978, has never recorded a rate below 4.0 per cent. However, we’re only just starting to see evidence on how the Omicron outbreak is affecting the economies in the east, and we anticipate the recovery will lose steam in the coming months. For the December survey, people were asked about their employment status with reference to the two weeks from 28 November to 11 December. It wasn’t until mid-December that the daily case numbers of the Omicron variant began to accelerate, and then in Victoria from the beginning of January. Almost 90 per cent of all employment growth in the past two months has been in NSW and Victoria, but that boost from the easing of restrictions associated with the Delta strain is likely to have run its course. Meanwhile, NSW and Victoria experienced sharp drops in on-line job vacancies recorded in the month to December 21, despite many employers struggling to fill positions.

With reports of widespread supply issues and businesses such as airlines scaling back operations, it is likely that labour shortages will lead to reduced rather than growing employment opportunities in this environment. The high number of cases associated with the Omicron wave in January will restrict people’s capacity to participate in the labour market, whether as workers directly contracting COVID-19, as contacts, or taking on caring roles. While those absent from work will primarily remain classified as employed, we anticipate recruitment and hence employment growth at the national level stalling in coming months.

Fortress WA just got stronger
While the national series has never produced an unemployment rate commencing with a ‘3’, it may well be the norm for WA through much of 2022. The unemployment rate in this state dropped from 3.8% to 3.4%, the lowest recorded since December of 2008. Before these figures had hit the following morning’s press, WA Premier Mark McGowan announced that WA’s planned border re-opening on 5 February was to be postponed. And the delayed border opening will also push back the associated shock to WA’s labour market from increased worker mobility once people are able to come into the state to take up job opportunities. Total employment in WA actually fell slightly in December, but don’t be fooled by that. Full-time jobs and average hours worked increased strongly, vacancies remain high and, critically, commodity prices ended 2021 at near record highs.

The State’s unemployment rate for calendar 2021 came in at 4.7%, down from 6.7% in 2020. The current outlook points to the State bettering that again in 2022. Significantly, the announcements around the extension of the ‘hard-border’ included additional exemptions to facilitate recruitment of skilled workers from interstate and overseas which, if utilised at scale, will put further downward pressure on the unemployment rate. The reference period for January’s labour force survey ended on the 15th. The immediate wildcard for February is whether the current cluster of Omicron cases can be contained, while rising wage and price pressures across the country suggest a cycle of interest rate increases could commence later this year.