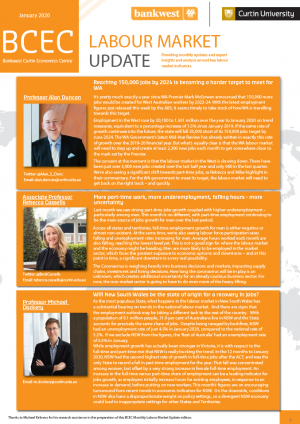 Key findings from January 2020 data include:

It’s pretty much exactly a year since WA Premier Mark McGowan announced that 150,000 more jobs would be created for West Australian workers by 2023-24. With the latest employment figures just released this week by the ABS, it seems timely to take stock of how WA is travelling towards this target.

Employment in the West rose by 20,100 to 1.361 million over the year to January 2020 on trend measures, equivalent to a percentage increase of 1.5% since January 2019. If the same rate of growth continues into the future, the state will fall 35,000 short of its 150,000 jobs target by June 2024. The WA Government’s latest Mid-Year Review has already written in exactly this rate of growth over the 2019-20 financial year. But what’s equally clear is that the WA labour market will need to step up and create at least 2,300 new jobs each month to get somewhere close to the mark set by the Premier.

The concern at the moment is that the labour market in the West is slowing down. There have been just over 5,000 new jobs created over the last half year and only 660 in the last quarter. We’re also seeing a significant shift towards part-time jobs, as Rebecca and Mike highlight in their commentary. For the WA government to meet its target, the labour market will need to get back on the right track – and quickly.

Last month we saw strong part-time jobs growth coupled with higher underemployment – particularly among men. This month is no different, with part-time employment continuing to be the main source of jobs growth for men over the last period.

Across all states and territories, full-time employment growth for men is either negative or almost non-existent. At the same time, we’re also seeing labour force participation rates falling and unemployment rates increasing for men. Average hours worked each month are also falling, reaching the lowest level yet.

This is not a good sign for where the labour market and the economy might be heading.

Men are more likely to be employed in the market sector, which faces the greatest exposure to economic upturns and downturns – and at this point in time, a significant downturn is a very real possibility.

The Coronavirus is weighing heavily into business decisions and markets, impacting supply chains, investment and hiring decisions. How long the coronavirus will be in play is an unknown, which creates additional uncertainty for an already cautious business sector. For now, the non-market sector is going to have to do even more of the heavy lifting.

Will New South Wales be the state of origin for a recovery in jobs? (Mike Dockery)

As the most populous State, what happens in the labour market in New South Wales has a substantial bearing on trends in the national labour market.  And there are signs that the employment outlook may be taking a different tack to the rest of the country.

With a population of 8.1 million people, 31.9 per cent of Australians live in NSW and the State accounts for precisely the same share of jobs.  Despite being ravaged by bushfires, NSW had an unemployment rate of just 4.5% in January 2020, compared to the national rate of 5.2%.  If we exclude NSW from the figures, the ‘Rest of Australia’ had an unemployment rate of 5.5% in January. While employment growth has actually been stronger in Victoria, it is with respect to the full-time and part-time mix that NSW is really bucking the trend. In the 12 months to January 2020, NSW had the second highest rate of growth in full-time jobs after the ACT, and was the only State to record a fall in part-time employment for the year. That fall was concentrated among women, but offset by a very strong increase in female full-time employment.

An increase in the full-time versus part-time share of employment can be a leading indicator for jobs growth, as employers initially increase hours for existing employees, in response to an increase in demand, before putting on new workers. This month’s figures are an encouraging turnaround from recent trends in economic indicators for NSW.  On the downside, conditions in NSW also have a disproportionate weight on policy settings, so a divergent NSW economy could lead to inappropriate setting for other States and Territories.