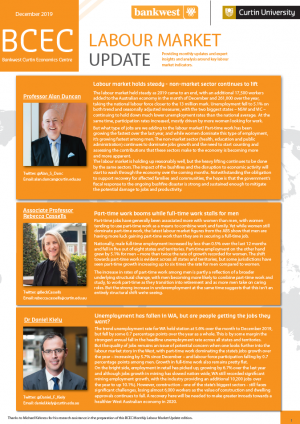 Key findings from December 2019 data include:

The labour market held steady as 2019 came to an end, with an additional 17,500 workers added to the Australian economy in the month of December and 261,000 over the year, taking the national labour force closer to the 13 million mark. Unemployment fell to 5.1% on both trend and seasonally adjusted measures, with the two biggest states – NSW and VIC – continuing to hold down much lower unemployment rates than the national average.  At the same time, participation rates increased, mostly driven by more women looking for work.

But what type of jobs are we adding to the labour market? Part-time work has been growing the fastest over the last year, and while women dominate this type of employment, it’s growing fastest among men. The non-market sector (health, education and public administration) continues to dominate jobs growth and the need to start counting and assessing the contributions that these sectors make to the economy is becoming more and more apparent.

The labour market is holding up reasonably well, but the heavy lifting continues to be done by the same sectors. The impact of the bushfires and the disruption to economic activity will start to wash through the economy over the coming months. Notwithstanding the obligation to support recovery for affected families and communities, the hope is that the government’s fiscal response to the ongoing bushfire disaster is strong and sustained enough to mitigate the potential damage to jobs and productivity.

Part-time jobs have generally been associated more with women than men, with women tending to use part-time work as a means to combine work and family. Yet while women still dominate part-time work, the latest labour market figures from the ABS show that men are having more luck gaining part-time work than they are in securing a full-time job.

Nationally, male full-time employment increased by less than 0.5% over the last 12 months and fell in five out of eight states and territories. Part-time employment on the other hand grew by 5.1% for men – more than twice the rate of growth recorded for women. The shift towards part-time work is evident across all states and territories, but some jurisdictions have seen part-time growth increasing up to six times the rate for men compared to women.

The increase in rates of part-time work among men is partly a reflection of a broader underlying structural change, with men becoming more likely to combine part-time work and study, to work part-time as they transition into retirement and as more men take on caring roles. But the strong increase in underemployment at the same time suggests that this isn’t an entirely structural shift we’re seeing.

Unemployment has fallen in WA, but are people getting the jobs they want? (Daniel Kiely)

The trend unemployment rate for WA held station at 5.6% over the month to December 2019, but fell by some 0.7 percentage points over the year as a whole. This is by some margin the strongest annual fall in the headline unemployment rate across all states and territories.

But the quality of jobs remains an issue of potential concern when one looks further into the labour market story in the West, with part-time work dominating the state’s jobs growth over the year – increasing by 5.7% since December 2018 – and labour force participation falling by 0.7 percentage points among men. Growth in full-time work also remains pretty flat.

On the bright side, employment in retail has picked up, growing by 6.7% over the last year and although jobs growth in mining has slowed nation-wide, WA still recorded significant mining employment growth, with the industry providing an additional 10,200 jobs over the year to up 10.1%). However, construction – one of the state’s biggest sectors – still faces significant challenges, losing almost 6,000 workers as the value of construction and dwelling approvals continues to fall. A recovery here will be needed to make greater inroads towards a healthier West Australian economy in 2020.