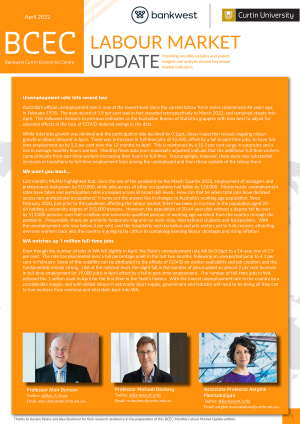 Australia’s official unemployment rate is now at the lowest level since the current labour force series commenced 44 years ago, in February 1978. The new record of 3.9 per cent was in fact awarded retrospectively to March 2022, and remained steady into April. This followed revisions to previous estimates as the Australian Bureau of Statistics grapples with how best to adjust for seasonal effects in the face of COVID-induced swings in the data.

While total jobs growth was minimal and the participation rate declined by 0.1ppt, closer inspection reveals ongoing robust growth in labour demand in April. There was an increase in full-time jobs of 92,400, offset by a fall in part-time jobs, to have full-time employment up by 5.2 per cent over the 12 months to April. This is reinforced by a 10.2 per cent surge in vacancies and a rise in average monthly hours worked.

Monthly flows data (non-seasonally adjusted) indicate that the additional full-time workers came primarily from part-time workers increasing their hours to full-time. Encouragingly, however, there were also substantial increases in transitions to full-time employment from among the unemployed and from those outside of the labour force.

We want you back…

Last month’s MLMU highlighted that, since the eve of the pandemic to the March Quarter 2022, employment of managers and professionals had grown by 510,000, while jobs across all other occupations had fallen by 126,000.

Mysteriously, unemployment rates have fallen and participation rates increased across all broad skill levels. How can that be when total jobs have declined across non-professional occupations? It turns out the answer lies in changes to Australia’s working age population.

Since February 2020, just prior to the pandemic affecting the labour market, there has been an increase in the population aged 20-64 holding a university degree of 313,000 persons. However, the population of 20-64 year olds without a degree fell by over by 513,000 persons: over half-a-million non-university qualified persons of working age vanished from the country through the pandemic. Presumably, these are primarily temporary migrants on work visas, international students and backpackers.

With the unemployment rate now below 4 per cent, and the hospitality and recreation and arts sectors yet to fully recover, attracting overseas workers back into the country is going to be critical to containing looming labour shortages and rising inflation.

Even though the number of jobs in WA fell slightly in April, the State’s unemployment rate fell by 0.5ppt to a 14-year low of 2.9 per cent. The rate has plummeted over a full percentage point in the last two months, following an unexpected jump to 4.1 per cent in February.

Some of this volatility can be attributed to the effects of COVID on worker availability and job creation, and the fundamentals remain strong. Like at the national level, the slight fall in the number of jobs masked an almost 2 per cent increase in full-time employment (or 19,000 jobs) in April offset by a fall in part-time employment.

The number of full-time jobs in WA eclipsed the 1 million mark in April for the first time in the State’s history. With the lowest unemployment rate in the country by a considerable margin, and with skilled labour in extremely short supply, government and industry will need to be doing all they can to lure workers from overseas and interstate back into WA.