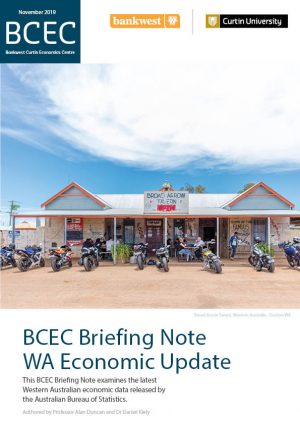 While the WA economy continues to grow, the GSP figures released today show only a very modest growth of 0.98 per cent over the year to June 2019. With the exception of the negative growth displayed in June 2017, this is the lowest annual GSP growth rate displayed over the last twenty five years in WA.

The mining sector now accounts for a whopping 40 per cent of industry Gross Value Added (GVA). While mining grew by 8 per cent in the year to June 2019, it occurred alongside a striking decline in Construction (down 18.7%), and Manufacturing (down 4.5%). In real terms, Construction is now at its lowest value since June 2006.

Meanwhile, household consumption expenditure grew at a weak rate of 0.9 per cent, with private investment declining by 8.2 per cent. The State’s net exports (exports minus imports) grew by 4.9 per cent over the year to June 2019, supported primarily by a strong demand for WA minerals.

The McGowan Government has got public finances under control. This will be a key legacy of this term of office. However, laying further foundations for future growth through ‘The Premier’s Plan’ remains a work in progress. Much has been achieved in steadying the State’s economic ship, but these figures show that there is much more navigation to do.