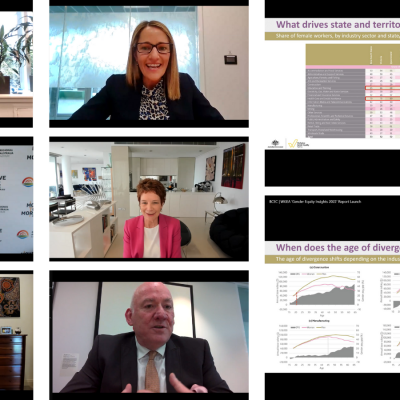 Bankwest Curtin Economics Centre and the Workplace Gender Equality Agency launched the seventh report in the series, Gender Equity Insights 2022: The state of inequality in Australia, on Thursday 20 October online.

This new report shows Australia’s gender pay gap could narrow by one third if a more balanced gender concentration was achieved across all industries and occupations.

Drawing on new WGEA data, the report finds Australia’s gender pay gap would fall from an estimated 23.3 per cent to 15.6 per cent if a 40:40:20 gender concentration – 40 per cent women, 40 per cent men and 20 per cent any gender – was achieved across all industries and occupations.

Watch the full report launch recording below, including the report presentation findings and full panel segment.