Gender Equity Insights 2022: The state of inequality in Australia 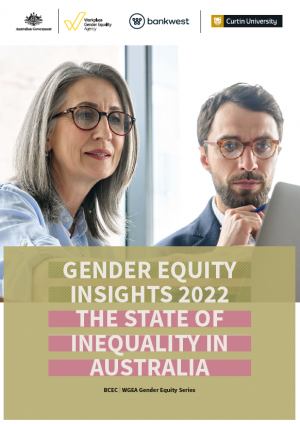 Missed the online report launch? You can watch it on YouTube here.

The seventh edition of the BCEC|WGEA Gender Equity Insights series looks at Australia’s gender pay gap and finds that it could narrow by a third if a more balanced gender concentration was achieved across all industries and occupations.

Drawing on new Workplace Gender Equality Agency data, voluntarily reported for the first time in 2020-21, the report finds Australia’s gender pay gap would fall from an estimated 23.3 per cent to 15.6 per cent if a 40:40:20 gender concentration – 40 per cent women, 40 per cent men and 20 per cent any gender – was achieved across all industries and occupations.

The analysis reveals the extent to which the overall gender pay gap is driven by higher concentrations of men in high salary industries and jobs, and higher shares of women working in lower salary sectors.

The report found that for Western Australia – the state with the nation’s highest gender pay gap – the gap in total remuneration would halve from 32.1 per cent to 16.5 per cent if a 40:40:20 gender balance was achieved across all industries. In the Northern Territory, the gender pay gap would reduce by two thirds, while New South Wales and Victoria would see gender pay gaps fall by 7.4 and 6.5 percentage points respectively. Queensland recorded a larger margin of 8.8 percentage points.