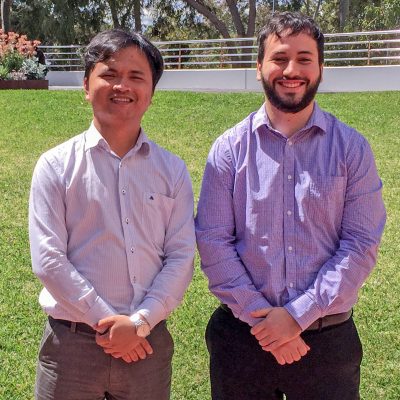 The Colloquium provides an opportunity for HDR students to present their research to the Curtin and wider communities. The theme of the 2017 event was ‘One PhD, many journeys’, reflecting the rich tapestry of research being undertaken by Curtin’s PhD students.

Mr Nguyen, who joined BCEC in 2015, presented his research that compares the impact of different high skilled immigration schemes on the number of immigrants to Australia.

“Not surprisingly, immigration under the employer-sponsored scheme increased in line with wage and salary growth caused by fluctuations in commodity prices, reinforcing the theory that immigrants flow to countries with high wage growth.”

Fellow BCEC PhD Scholar Christopher Phelps addressed the colloquium on his research into housing prices between the years 2000-01 and 2015-16.

“During this period, we found large variations in the increase of house prices among different suburbs within the same cities,’ Mr Phelps said.

“House prices in low priced suburbs within Australia’s largest 15 cities grew at a faster rate than those suburbs with generally higher priced houses, suggesting that within-city house prices converged over the period.”