Work Incentives and Decisions to Remain in Paid Work in Australia 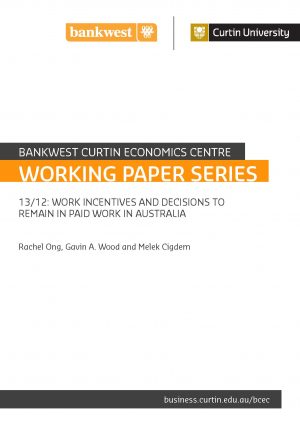 Lifting workforce participation rates is a key objective of Australian policy-makers. The most recent evidence of this emerged in the lead up to the 2013 Federal election. The Coalition proposed that young Australians unemployed for 12 months or more and receiving Newstart Allowance will be offered a job commitment bonus of $6,500 if they are able to commence and maintain continual employment for 24 months. This measure is designed to reduce the work disincentive effects that discourage the take-up of employment, though the work incentive position of those working is unaffected. Work incentives and welfare dependency have been a long-running concern in public policy circles; for example, back in 2000, the McClure Report (Reference Group on Welfare Reform, 2000) cited inadequate financial rewards for some forms of work as a major shortcoming of Australia’s welfare system. There are at least three reasons why work incentives are a continuing policy concern. Firstly, the ageing of the Australian population and an increasing dependency ratio is a major cause of fiscal pressures for a Commonwealth government grappling with a budget deficit that is forecast to reach $30 Billion in 2013-‘14. By lifting rates of economic participation, and in particular extending working lives, governments hope to ease these fiscal pressures. Secondly, there is recurring unease that blunt work incentives result in welfare dependency. The observation that 18% of Australia’s working age population (over 2.4 million people) is at least partly dependent on income support payments is a reason for apprehension. Thirdly, the geography of Australian labour supply is one where regions with persistently high rates of unemployment continue to exist alongside regions with labour shortages. Areas of metropolitan and regional Western Australia exhibit the most serious shortages of labour as a result of the mining boom. Regional labour market adjustments should produce a wage surge in these areas, and hence sharpen work incentives and encourage labour supply. But high housing costs are believed to eat into wage incentives and impede these regional adjustments. In an earlier study (Dockery et al. 2011) we analysed the work incentives of the unwaged over the short period 2001-2003. The current paper shifts the focus by considering the work  incentives of the employed and the financial motives underpinning decisions to remain in paid work. This is of particular relevance to policies aimed at extending the working lives of mature age workers. To measure work incentives, we use a microsimulation model covering a comprehensive range of Australian taxes and benefits; it allows us to analyse interactions between taxes and benefits over almost a decade (2001-2009). The model is operationalised using a nationally representative longitudinal survey – the Household, Income and Labour Dynamics in Australia (HILDA) Survey. Following a brief review of the literature, the paper profiles changes in work incentive measures over the first decade of the new millennium in order to detect whether the incentive to work has become stronger or weaker. It also explores variation in work incentives across subgroups in the population with a view to identifying those lacking a strong financial motive to remain in employment. The geography of work incentives is examined by comparisons drawn across state capitals and non-metropolitan regions. We then analyse whether the labour market behaviour of employed Australians is actually affected by work disincentives. Measures of work incentives are added to models that predict the probability of remaining in paid work. A conclusion summarises and offers some observations on the significance of our findings.