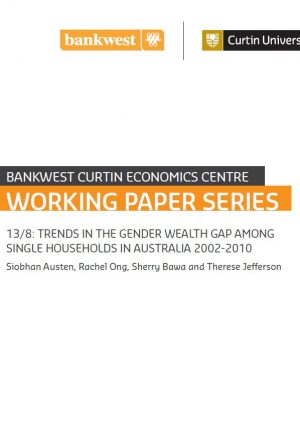 This study uses three wealth modules from the Household, Income and Labour Dynamics in Australia Survey to explore the gender wealth gap for single Australian households between 2002 and 2010. The findings indicate significant gender wealth gaps, which have increased over the last decade. The wealth gap increased for younger and mid-life cohorts of Australian single households and for households in the mid-range of the wealth distribution. Most of the increase in the wealth gap was associated with a relatively rapid accumulation of housing assets by single men over the study period. The findings of this study challenge a wider literature that tends to emphasise differences in the risk profiles of men’s and women’s wealth portfolios and how this may result in higher returns to wealth for men who appear to be more prepared to invest in ‘risky’ assets such as shares. Instead, our study emphasises how, in the Australian context at least, it is higher growth rates in the value of properties owned by single men that have improved their wealth position relative to women over the last decade.