In Resource Curse or Cure? On the Sustainability of Development in Western Australia 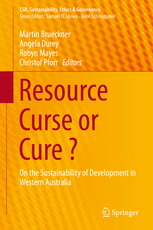 Much of Western Australia’s economic development and prosperity is derived from mining activity which takes place in remote areas in which Indigenous peoples disproportionately reside, and on country over which Indigenous Australians are now legally recognised as the custodians. It would therefore seem logical that mining should offer a potential basis for improving Indigenous employment and a resource-base upon which to promote self-determination. This paper uses census data to investigate whether the recent mining boom in WA translated into improved employment opportunities for the Aboriginal and Torres Strait Islander populations living in those areas. Despite significant advancements in the legal framework for Native Title and stated commitments to corporate social responsibility towards local Indigenous populations, the results suggest that Indigenous communities leveraged minimal benefits from the mining boom in terms of employment opportunity.