Mining and mistrust in government 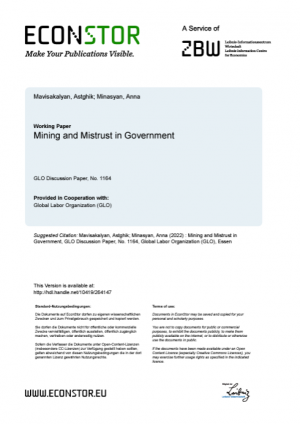 Recent research shows that natural resources can hurt institutions by promoting corruption and diverting resources from the production of public goods. This, in turn, may have implications for the trust individuals hold for their governments.

We explore this possibility by linking survey data on over 43,000 individuals with spatial data on mine locations in 27 post-communist countries of Central and Eastern Europe and the former Soviet Union.

By exploiting the information on the development status of each mine site, we draw comparisons between individuals living in the vicinity of active versus inactive mines, imitating a difference-in-differences strategy applied to cross-sectional data.

We show that there is a negative association between mining and trust in government- a finding that is robust to a battery of tests.

Our analysis of the mechanisms confirms that corruption perception and, to a lesser extent, dissatisfaction with public good provision, are likely behind this relationship.

The analysis of the consequences of such mistrust in government points towards a potentially damaging impact of mining for new democracies.

The results suggest that mining activity might decrease individuals’ willingness to go on lawful demonstrations and participate in civil and political movements.