Changing demand for STEM skills in Australia and gender implications 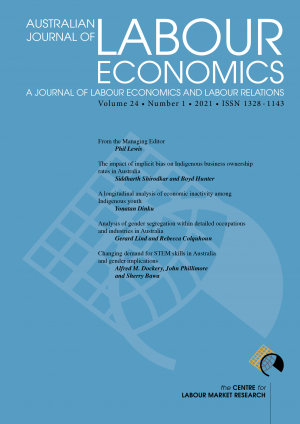 A method is developed for measuring the intensity with which skills in science, technology, engineering and mathematics (STEM) are used in different occupations based on workers’ field of education of their highest qualification and weighted by the wage premium associated with that level of qualification. This is used to model changes in demand for STEM skills, and in other fields, based on the changing occupational composition of employment in Australia between the 2006 and 2016 censuses, and on projected changes to 2024.

The approach offers a number of advantages over previous measures used to define STEM workers.  Most importantly, by generating a continuous measure of STEM-intensity rather than a binary STEM versus non-STEM definition, it incorporates VET qualifications rather than just university level qualifications, and allows for transferability of STEM skills to what might be considered ‘non-STEM’ jobs.

Contrary to popular narratives around STEM and the future of work, we find that the changing nature of work is actually reducing the demand for STEM skills relative to skills in other fields of education. Health stands out as the field in which the demand for qualifications has been growing most strongly.

We also find that technical and trade jobs account for almost the same level of demand for STEM skills as professional occupations, reflecting the importance of including the VET sector in any STEM agenda.

While governments have actively sought to promote ‘women in STEM’, our results suggest that, if anything, women are benefitting in terms of the demand for their skills by the fact that they are under-represented in STEM, and over-represented in key services such as Health and Education.

We caution against an uncritical acceptance of the need for a higher proportion of people to specialise in STEM fields. More explicit and testable statements of the rationales and assumptions behind STEM definitions and associated policy are needed to further advance skills forecasting and the appropriate role, if any, of a unique STEM agenda within that framework.